For the week leading up to the 2017 Auckland Champs the forecast was for terrible weather, with heavy rain and thunder storms predicted for the Saturday and more wet stuff for the Sunday.

How wrong were they (they really need to get a window in the met office I reckon).

The conditions couldn't have been better as the 54 official players and the 6 one round casuals headed to their starting tees on the Saturday morning. What made this reporter smile was the fact that about half of the players registered to play the weekend I didn't even know. This is a good indication that our great sport is really taking off.

After Saturday's two rounds of 18 it was obvious the battle was going to be for second as Jackson Sullivan had made a break on the also-ran's with rounds of 48 and 49, giving him an 8 shot buffer over Waiheke's Siep Van Vliet is second. In the Woman's division West Auckland's Charlotte Dunkley threw a PB round of 61 in the afternoon to stay within 2 of Paula Wilson setting up a battle royal for the Sunday morning.

Jackson's form continued on the Sunday morning with another 10 under the card 48, giving him a score of 29 under and a 12 shot buffer over Mario Cerniar who was 1 shot up on fellow Masters contender Siep Van Vliet going into the Safari 'Super 6'. In fact with Grand Master Marty de Haas, Queenstown's Hemi Te Awhitu and Californian Jeremy Watson all tied for 6th, the Super 6 became a 'Super 8' which added to the spectacle for the large gallery following the action.

What a weekend of Disc Golf. Congratulations to everyone who came to play especially our 'Rookie Division' of 10 first time tournament players.

Thanks must also go to Haydz and his Woodhill crew for looking after the course and making sure things ran smoothly. I'm picking that when the registrations come out for next year, you'll need to be in quick for a place in the field!

Many thanks to disc golfer and photographer extraordinaire Rani Timoti for most of these great shots of the action at Monte Cecilia Park... 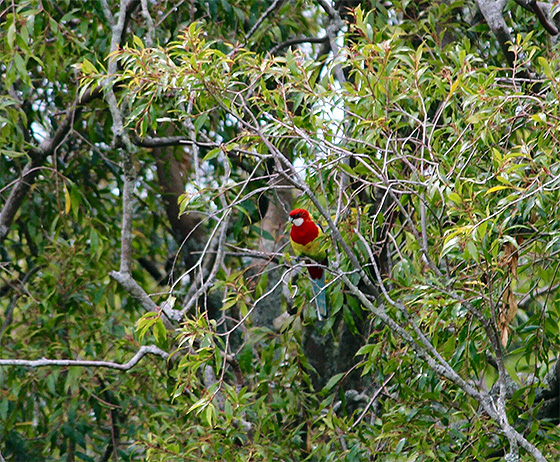 Aerial Spectator - A colourful Rosella gets a birds-eye view of the action. 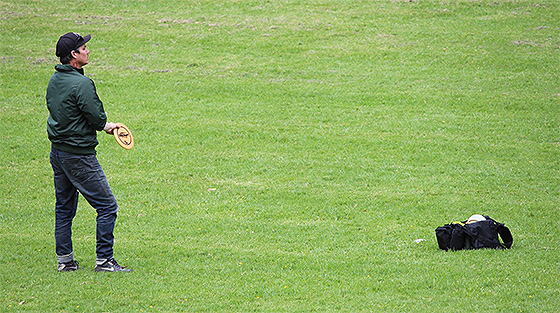 Room to Move - With plenty of run-up space, [unknown A] visualises his approach to the basket on Hole 7.

Pathway to Knowledge - Some local dogwalkers got to find out what this "strange" sport was for the first time. 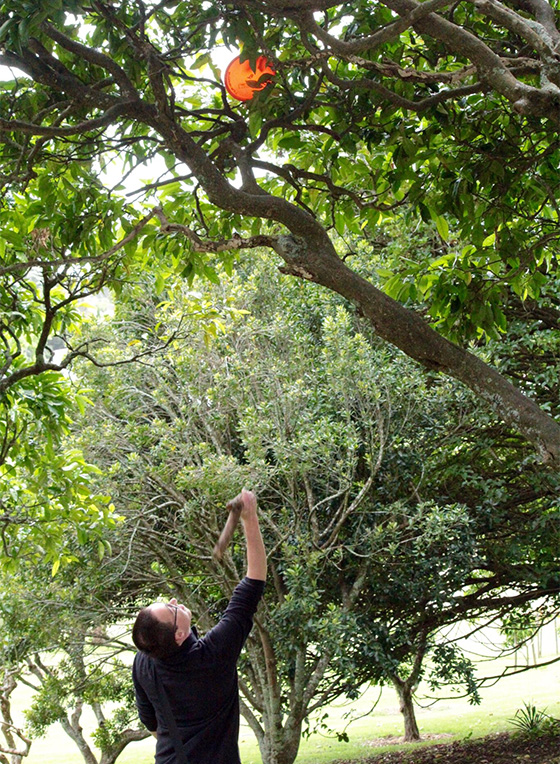 Give it back! - Eliot Tyler discovers how easily the Monte foliage can gab hold of a disc - here on Hole 14 with it's new tee placement we saw a lot of this. 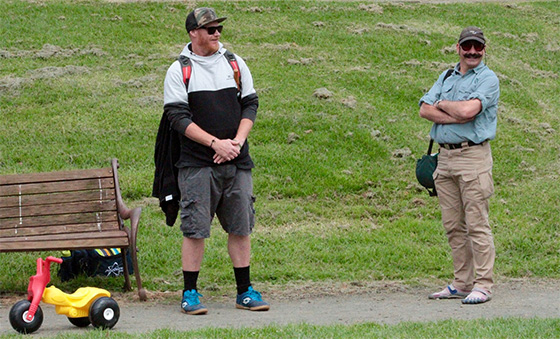 "It'll be faster. I think" - [unknown C] and Mark Thomson challenge each other to take on the Full Monte descent on the 3-wheeler. 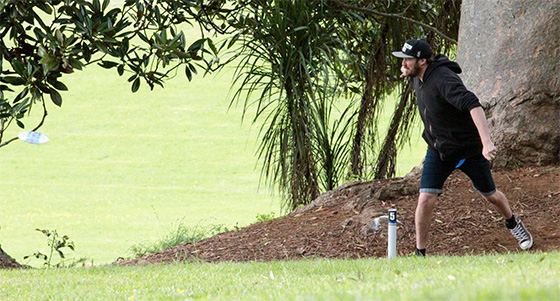 Native Tee - [unknown D] Sends a solid drive away under the shadow of a huge Kauri tree, a New Zealand currently under threat from a phytophthora called Kauri Dieback which has all Kiwis concerned. 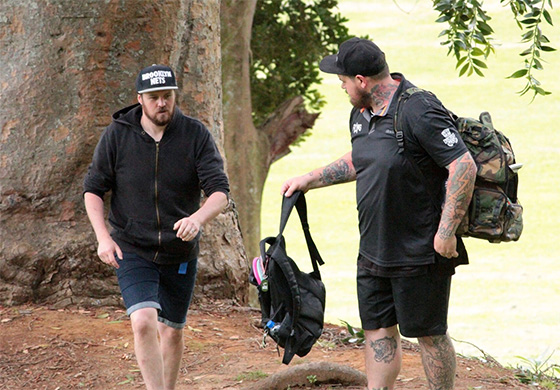 The Champs a Champ - Jacko shows that one can focus on their game whilst showing courtesy to other players - a true champion. 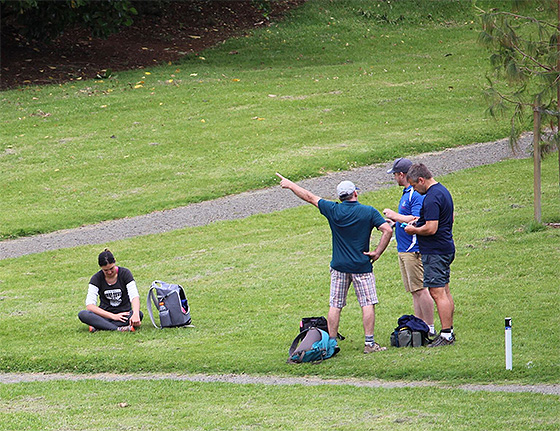 "It was definately an Ace on 4!" - We don't know the conversation that ensued here but do suspect it had to do with scoring :o) 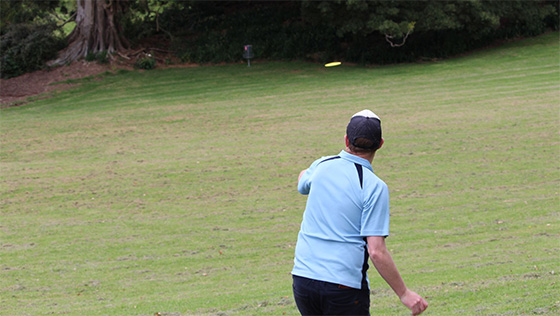 Moore than just a pretty face - Nathan Moore showed little sign of his hiatus from competitive disc golf with an impressive 59 in his first round. Here he fires straight and true towards the basket on Hole 7. 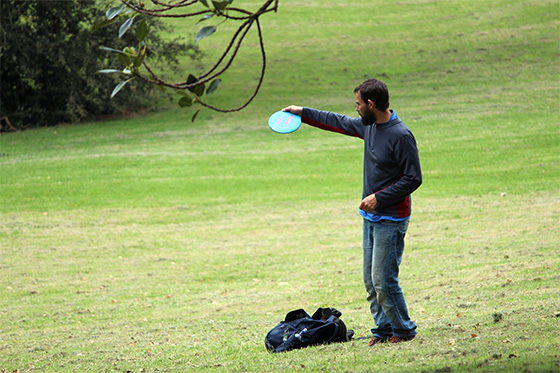 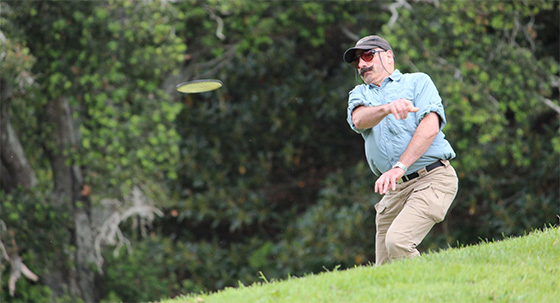 Belting one out - Grand Master Mark Thomson was all style with this forehand effort on the fairway. 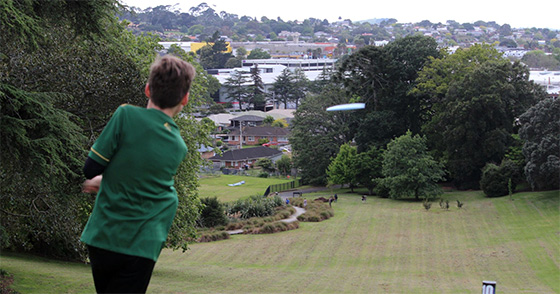 The Full Monte - The 10th is a wonderful tee shot to watch from any angle. Here Sam Hulbe-Pulver starts things off well with a forehand release into the air heading towards the basket waaaaay down the end of the huge fairway. 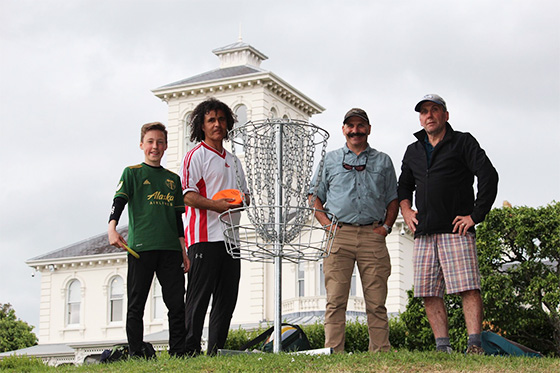 Winning team - Scores are not so important when you have the style and grace of this foursome, from left Sam Hulbe-Pulver, Trevor Timothy, Mark Thomson and Quentin Golder. 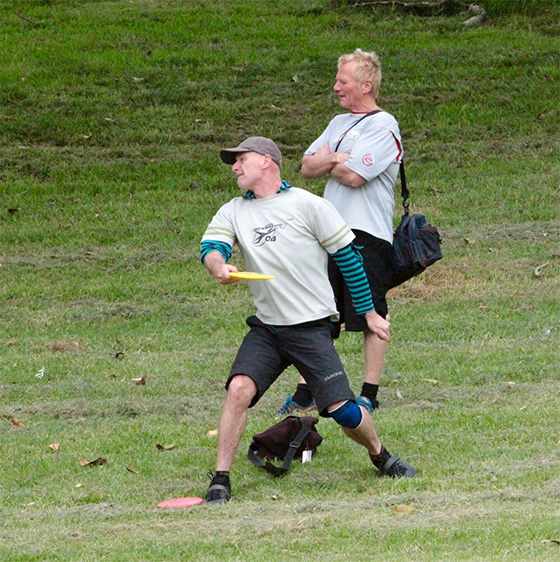 Mind Games - The feud between the calm friendly Mexican Juan Unda and the devious Dutch Marty de Haas has spanned decades and we see no respite in the near future. Here the bothersome Hollander tries in vain to get into Unda's mind as he delivers yet another deadly accurate approach shot. 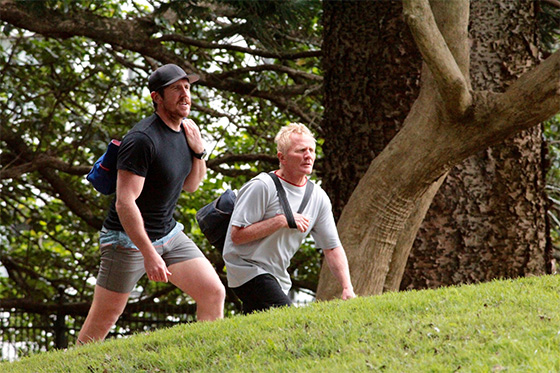 Cresting the Wave - Golfing surfers Marty de Haas and Andrew Le Breton check out the action for other groups as they head to their next teee. 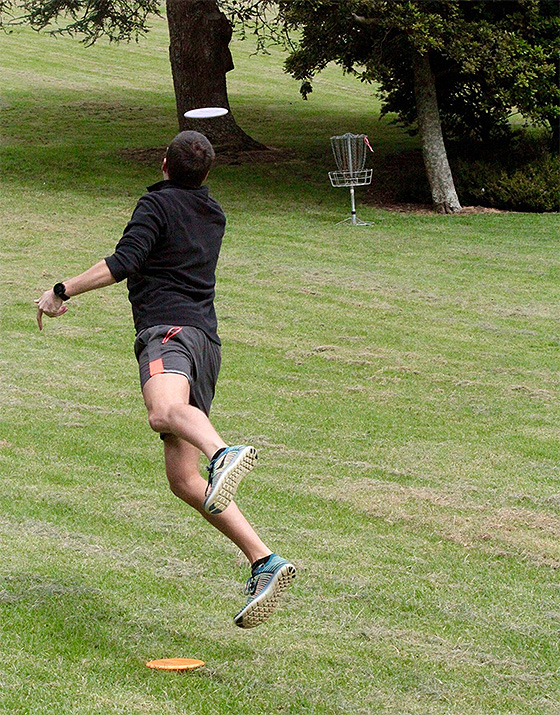 Leaping Lizards Batman! - We saw all sorts of leaping putts like this action shot by Elliott Tyler on Hole 12. 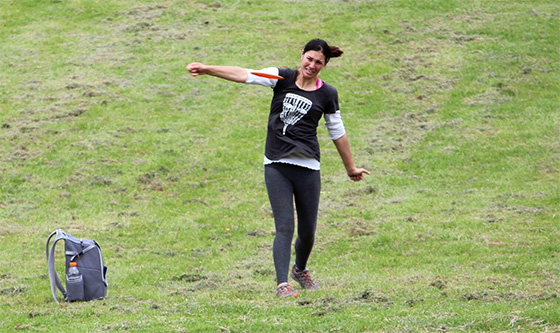 Another Brotherhood Champ - Now heading towards the top of the female ranks, Paula Wilson shows power to match her precision with her approach on Hole 7. 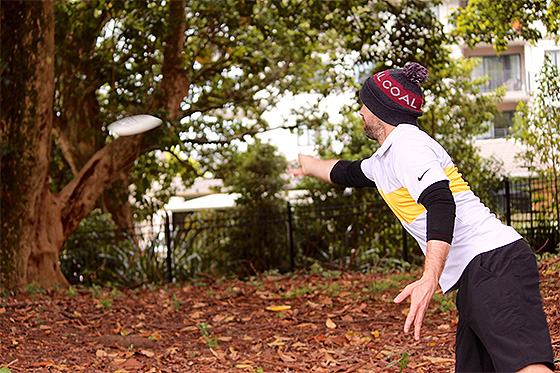 Leafing through - a colourful shot of Tom McKay trying to hit the chains on the short Hole 15. 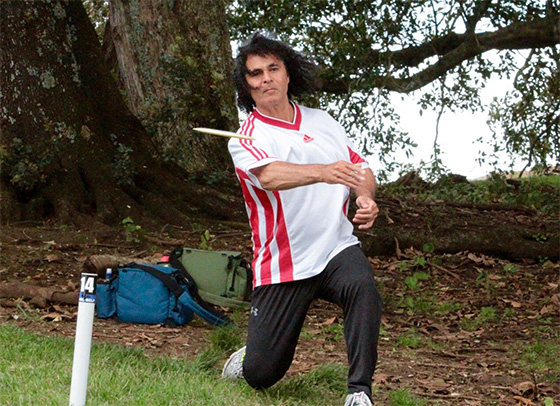 Clever Trevor - Muriwai's Trevor Timothy shows his own Crouching Tiger version of the forearm drive on Hole 14 on this, his first ever disc golf tournament. 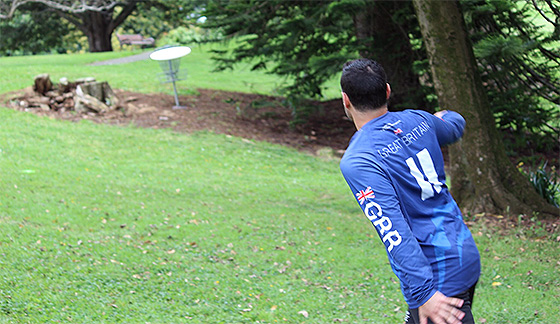 Please don't roll - [unknown E] - like many - was willing his disc not to roll down the hill on the innocent looking Hole 3. 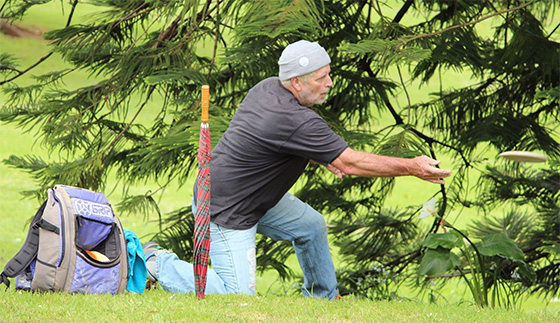 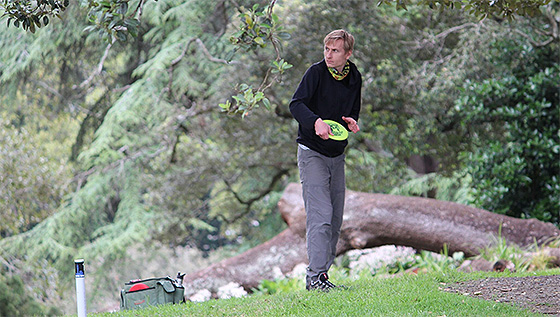 Scarf-Ace? - No, not Al Pacino, this is Tomáš Doležel daring to consider the possibilty of a hole-in-one on the long Hole18. 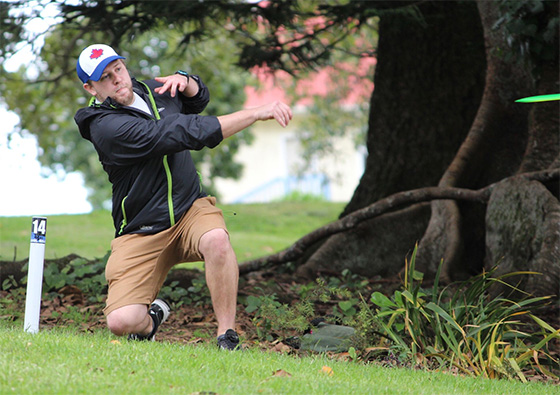 How many chucks can a Canuck chuck? - What better way to control your flight on the disc-hungry Hole 14 than chucking a kneeling forehand! That's what [unknown G] here thought as he sent his plastic fading around the first overhang to drop back into the narrow fairway - well done! See below for how this hole can turn a dream round into a nightmare... 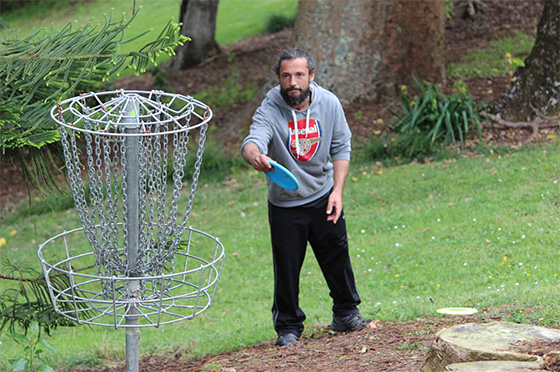 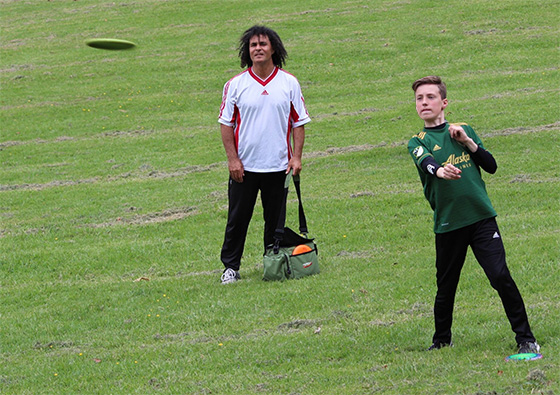 Green n Gold - It may have been hif first time on The Tour but Sam Hulbe-Pulver shot some great golf to take out the Juniors title - well done! 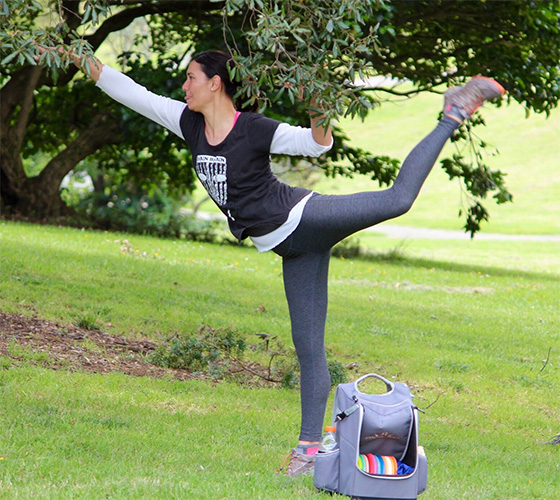 Holding the Pose - Almost like an art-piece in the park, Paula Wilson perfect putting style was on display yet again. 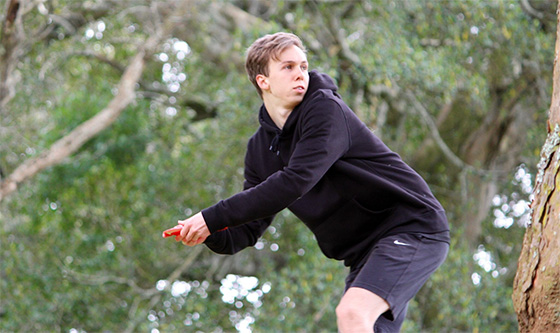 Leftie Legend - Still growing is Toby Gentil who has been around dsic golf all his life. With a huge left arm, check him out playing the Auckland Champs 10 years ago as a 9 year old - click here! 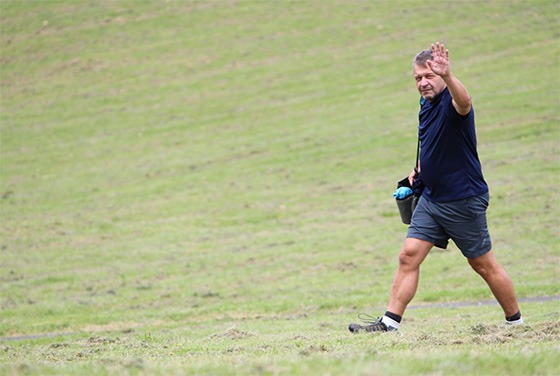 Solid Player - Acknowledging the warm applause of the gallery on his way to securing 3rd place in the 2017 Disc Golf Tour was Super Mario Cerniar. 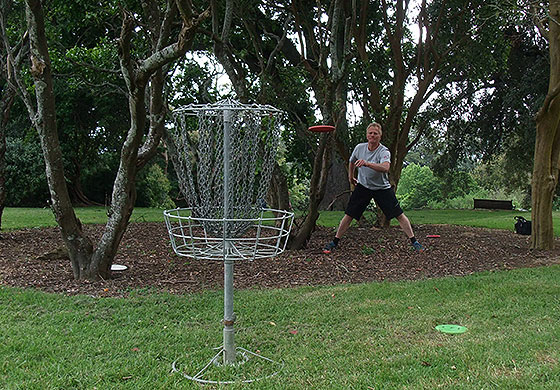 Rusty Confidence - Despite not playing much competitive golf, Marty de Haas was firing off the same old deadly putts to make a surprise showing in the Super 6-er 8. 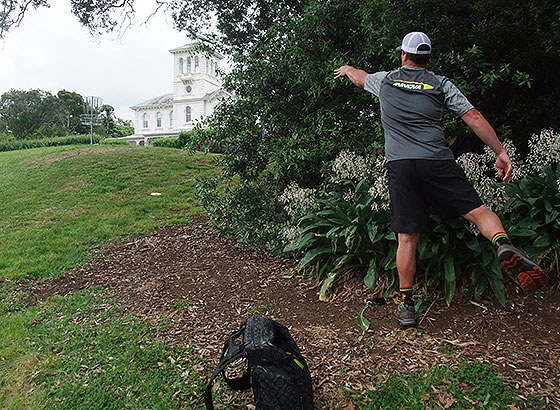 345 Hemi - Leading Southern player Hemi Te Awhitu looking to save a par on the uphill 9th. 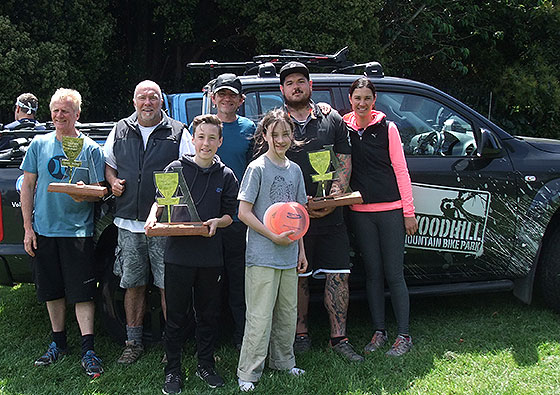 Calm Palmer - Relatively new golfer on the scene Brad Palmer shows great drive control as he attempts to climb up the fairway of the 6th watched on by his group.

Canine Capers - Being a park that sees lots of dog walking it was no surprise to see at least one instance of a canine capture of a disc. Fortunately this was not a Waihekian's disc so the dog owner was not yelled at - it was all taken with a good ol' chuckle.

Righto Trev - Trev sends his trusty disc as straight as he can for the ace-able 15th.

Steady Release - Charlotte Dunkley is all focus as she powers her drive away on the 3rd.

Leftie Lurch - Having driven his ace-drive beyond the basket, Dave Speedo Keene needed a firm accurate putt to secure a birdie on the 15th.