Welcome to the 2013 Wakatipu Disc Golf Championships. Our thanks to TD James 'The Jag' Smithells for a great tournament and this story.

As part of our continuous quality improvement programme, in the months leading up to our annual tournaments we upgraded Tees 17 and 18, created a new Tee 13 (effectively a new hole, to avoid crossover) and turned the sow's ear of Tee 7 into the silk purse that is now " the best disc golf tee in New Zealand '', featuring acres of tiles, wraparound stonework, and verdant Ground Guard. The keen members of the Queenstown Disc Golf Club got the publicity machine rolling early and there was soon talk of big turnouts at our annual tournaments. And so it came to pass.

54 people turned up for the 18th Annual The Helicopter Line Queenstown Classic on a mild still morning in the Queenstown Gardens; the biggest turnout ever. Our highly efficient registration team soon had people sorted into groups and it was briefing time. After years of jokes regarding my Queenstown time approach, I advised the gathered throngs that I'd been told, to my surprise, that apparently this was supposed to incorporate some aspects of time management! So we rattled through the necessaries and teed off at 10.30, our earliest start ever.

Most notable feature of the morning round was Ed Cochrane, in the Under 18 Division, achieving a fine 53 and knocking five strokes off the record. Only eight players, from various divisions, managed to achieve sub 50 rounds, with Simon Falcon Feasey having his beak well out in front with a fine 44. An intriguing afternoon tussle was promised in the Women's division, with three players tied for the lead.

Although 10 minutes went AWOL prior to the afternoon briefing, this was magically recouped and the round kicked off on time, under hot sunny skies. When the results were finally assembled several records had tumbled, most notably Lisa Te Awhitu taking nine shots off the Women's 36 hole record, with 114, and Toby Gentil taking nine shots off the Under 18 36 hole record, with 109. Top efforts! Chris Dingo Davies took one shot of the 18 hole Masters record, with a fine 46. Bob Polecat Gentil took two shots off his shared 36 hole Grand Masters record with an excellent 98. And Nigel Honey Badger Hailstone took one shot off the 36 hole Masters record with a creditable 96. All these players won their divisions, apart from Chris who came second to Nigel.

The Falcon demonstrated yet again, as if we didn't already know, that he's the man to beat, backing up with a 45 to take out the Open Division with an excellent 89 total.

Eliott had once more done a great job of obtaining good prizes from our ever generous local businesses and even 23rd in the Open got one! Chris Dickson from Rydges Hotel donated a veritable cornucopia of prizes, including the $300 night for two in Rydges, won by John Menzies with the first ace, on Hole 7. Included in Chris's prizes were two magnums of champagne, one of which was sprayed around Grand Prix style by Simon.

So off to Paradise, with the promise of further good weather. A top night was had around a big fire at the Garden of Eden, as always, with more people staying there than ever before. Wanaka won the fire. The morning dawned sunny, if slightly bleary, and 43 players turned up for the 16th Annual Dart River Jet Safaris Paradise Plates Doubles; Neil Hound Dog Hardey playing with his shadow. Simon and Nigel scored a commendable 43 and just held off four other pairs on 44.

The Singles round started rather late, around 3pm; hey, nobody told me I had to change Paradise time! The conditions remained hot and still, in considerable contrast to the previous year, and the field of 46 was our biggest ever. No records were broken, but a good time was had by all. When the dust settled, Dave Speedo Keene had succeeded in prevailing over the Fease, with an excellent 43 in his first outing at Paradise. Chris Davies turned the tables on Nigel in the Masters and Peter Coyote Crowther stormed past the evergreen GM to win the Grand Masters by five strokes. Lisa again prevailed in the Women's and Dylan turned the tables on Toby in the Under 18s.

At the prize giving Lisa provided another Grand Prix moment with the second magnum and then, with all the formalities concluded, it was time for relaxation and preparations for the evening. A massive pile of firewood was gathered, mostly by the Wanaka pyromaniacs, and the biggest fire I've ever seen there began building. When the flames were at their peak, the Jaguar emerged in fitting dress and the Jungle of Fame ceremony began. Many new people adopted animal names, with Nate Elephant Stone even having the trumpet call to match. As the fire died down the animals slowly crawled off to their lairs, bringing to conclusion another special Paradise experience.

Thanks once again to the great team down here and to all those who visited to take part in our tournies and help make them the undoubted success that they were.

May it begin - 10:30m Saturday morning and we head for our starting tees. Amazing!

Easy with an F - Simon shanks his drive miles from the basket. Yeah right! Note the fine landscaping by James and friends.

Galley in the Alley - Wanaka mover and shaker Martin Galley putts at 17 in the Gardens.

Sneaky Swig before presentation - Queenstown Champ for yet another year Simon Feasey has a few words while the TD snaffles a swig.

Sounds like a record - A tournament record 56 players take in James's every word ahead of the 2013 Queenstown Classic. 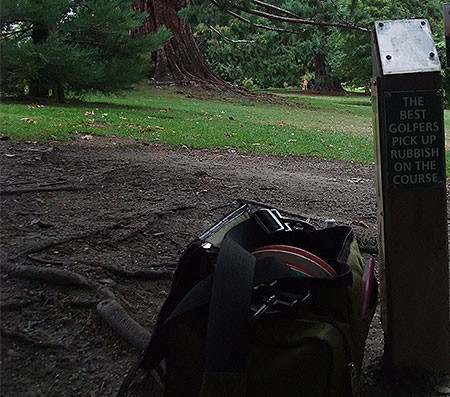 Only the Best - So if you want to be the 'best' golfer, you know what you have to do. Nice sign James. 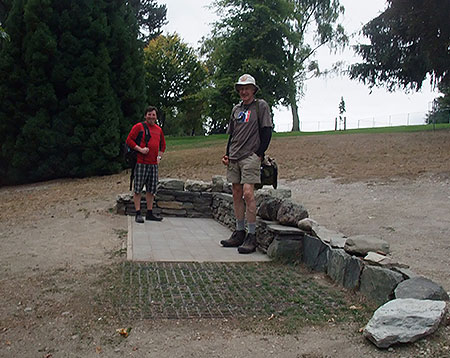 Jeepers Teepers - So proud of his work, and rightly so. The Jaguar and Robin Lilly pose on "the best Tee in the world". 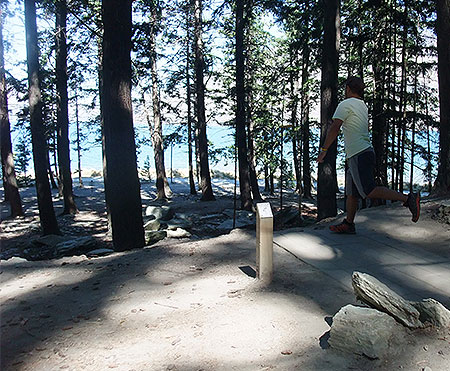 Decihemihedron - Hemi Te Awhitu sends his shot towards the lake on 10. 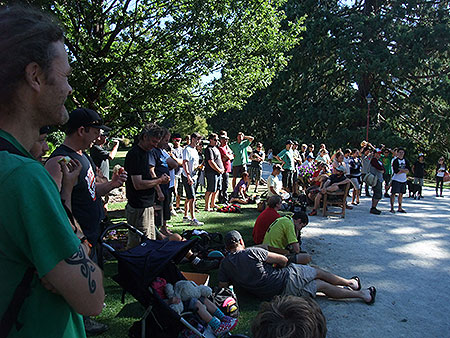 Summer Golf - Stunning Southern weather as the players wait to hear who won what! 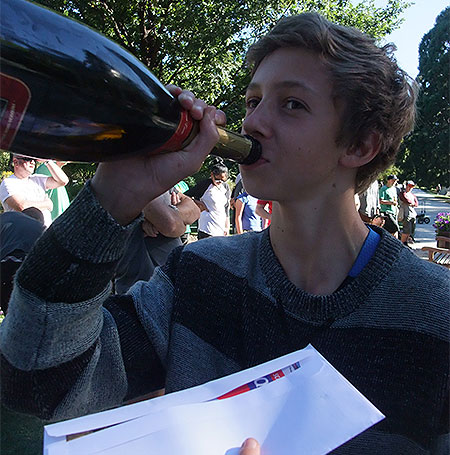 Flight Delight - Bubbles in one hand and a Helicopter Line flight in the other. The Junior winner Toby Gentil. 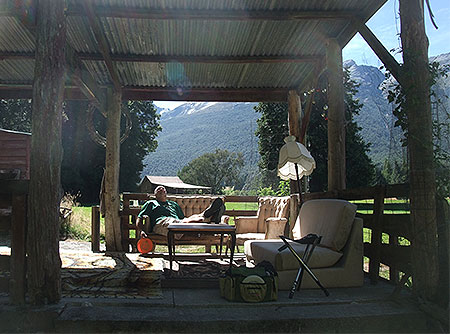 Relax - The GM in Paradise, literally. Finally they've put in a Senior Grandmasters lounge at Paradise. 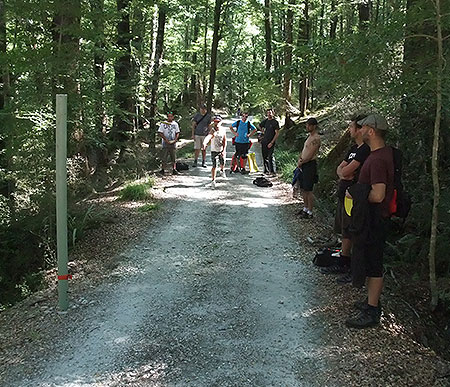 Waiting for 18 - 18 at Paradise. It's a tricky hole at the best of times let along with a gallery and a photographer watching.

Welcome to Paradise - Stunning weather as James rallies the troops ahead of the afternoon singles round at Paradise. 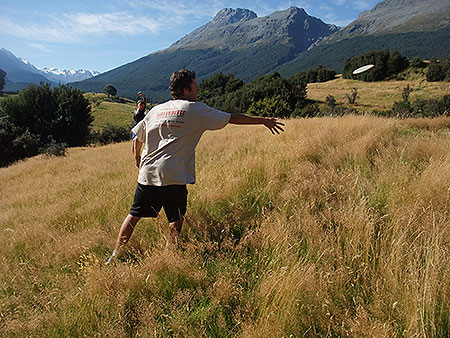 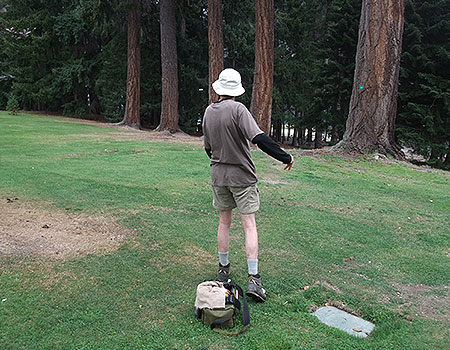 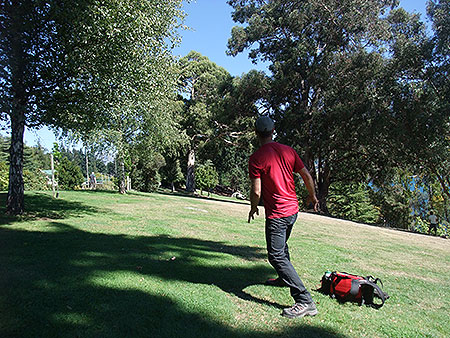 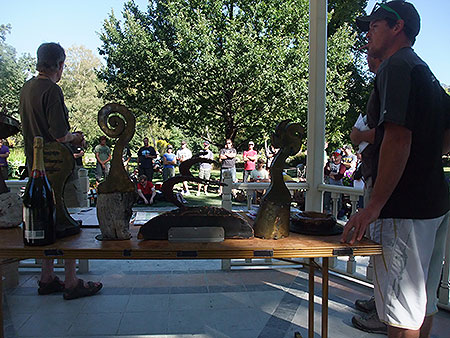 Motivational Art - The awesome Queenstown Classic trophies are handed out for another year. 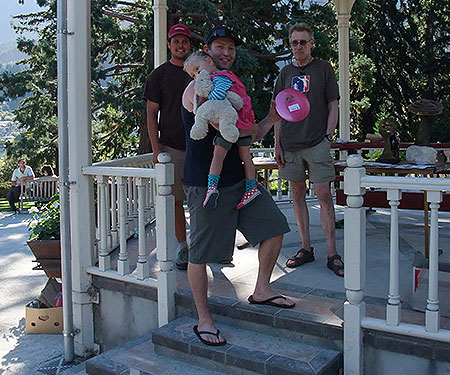 Disc 'n Doll - Local golfer Chris Dixon picked himself up a new disc and a little girl for his 6th place in the Open. 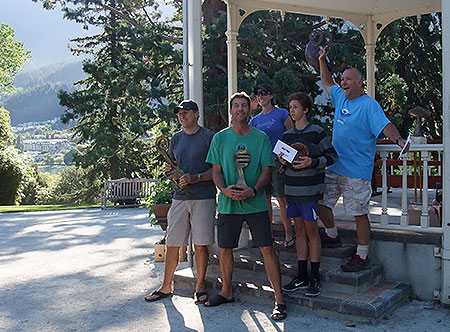 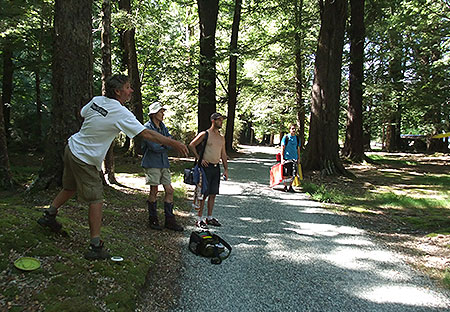 McNabbed It - Christchurch golfer Craig McNab putts out 16 at Paradise, much to his doubles partner's appreciation. 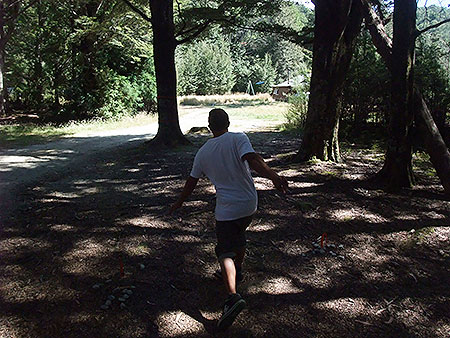 "This is much better than tennis!" - First time tournament player Louie Lanz from Queenstown plays to the Wigwam on hole #1. 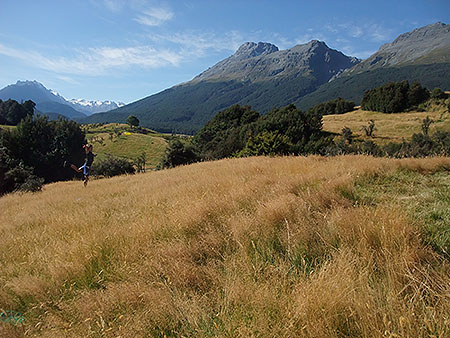 Lord of the Kachings - Toby Gentil lost in the scenery at Paradise. 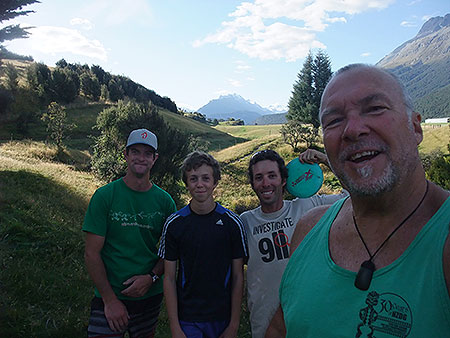 Four on the Floor - The GM, son Toby Gentil and playing partners Mark Edmunds & Louie Lanz having a good time at Paradise.