Many of the Disc Golf fraternity within this country are happy to see a new year, which brings with it new goals and best of all a new NZ Disc Golf Tour to sink their teeth into. The promise of the same old faces and new friends fell true right from the first instalment.

And what a way to start! What has become a real draw card on the Disc Golf Tour over the last couple of years is the amazing course that is Rotorua's Scion Nursery Disc Golf Course. This year we were lucky enough to have course designer Simon Feasey put his hand up to TD the event that he has missed for the last two years.

A staggering 49 players turned up to the players meeting. While that illusive number 50 had many pointing the finger at local legend and fast improver Andy George being AWOL for his very own local tournament, the rumor mill also suggested sightings of Juan Unda and Marty de Haas  being lead astray by none other the parental figure (and one-time TD of this event) of Andrew Taylor who, according to the bookies, was on his first weekend away from his son Cooper (congrats Karoline and Andrew by the way). Never fear, the local representation has become a strong contingent on the tour over the last twelve months with Logan Papuni leading the charge from the Bloor lads and the wise eyes of Mikey Gronsdma.

As we have come to expect the weather was playing its part in a weekend that can only be described as Epic! The course itself was in pristine condition thanks to the fantastic people at Scion.

All the elements were set for a quality tournament and it didn’t disappoint.

After the first round we saw New Zealand’s favourite adopted traveller Moe ‘Tralala” Dorken at the top of the leader board with an impressive 52 while hot on his heels was defending Champion David Keene and Tour Champion Simon Feasey both within striking distance. Solid opening rounds from Brad Muir, Jackson Sullivan and Logan Papuni saw them all in contention too for the first title of the year.

But also it has to be said how inspiring and positive it was to see so many new faces and some returning wiser faces in the likes of Baz Keene and Daz Swatella. With so many new faces TD Simon Feasey opted for the random draw method to encourage all new players finally giving the sport of Disc Golf a go.

Some say this worked against the TD as he rarely found himself going into the third round behind, while defending Champion David Keene was going to make sure he at least kept the 2013 Tour Champion working for it. Caught up in the log jam was Berlin's Moe and Levin’s happiest social athlete Lawton Williams.  In the Grand Masters Division it was a real tussle between Des Cooper, Shane Sullivan, Pete Boyle & Bob Gentil while 2013 Womans Champion Gemma Sullivan was showing the boys how it was done by securing her very first tournament ACE on the tight and tricky hole 11!!!!!

The exciting part of it was how tight the field was and how the standard of play has increased over the last twelve months. Although the part Gemma liked the most was being in front of brother Jackson on the leaderboard overnight.

Sunday morning, a change of weather and a change of course and a new hole! This was either a masterstroke by the TD or a more logical decision to play the course in a better format. Sadly for the others it was the latter and no blame can be placed on the TD - although numerous players happened to shoot their best rounds of the tournament with positive feedback for the proposed permanent changes.

Simon Feasey again asserted his dominance and put himself at the front of the field while David Keene was helpless to do anything going the entire round without a birdy and opening the door for Moe Dorken to take second place going into the Super Six. Gemma was again raising the bar in the woman’s field taking the title comfortably and adding the missing piece to her collection while in the tightest of tussles and a matter of two shots saw Pete Boyle claw his way to the top of the Grand Masters division.

The Super Six saw some amazing safari holes created and were enjoyable for all to watch. They also provided the platform for much shuffling within the playing six that comprised of Simon Feasey, Moe Dorken, David Keene, Brad Muir, Jackson Sullivan & local representative Logan Papuni.

Call it local knowledge if you will however the golf that Logan Papuni played in the Super Six was sublime.  With nothing to lose and everything to gain he stepped it up a notch and was able to pull out some beautiful range of shots to give him birdies on some technical par 4’s and a tricky par 5. This lifted him above Jackson Sullivan and put him within sight of Brad Muir who was enjoying his first time in this particular Super 6.  At the top end of the six Moe “Tralala” Dorken had come out of the gates with a talent spasm on the first two holes to attempt to haul in Simon Feasey.  His luck ran out on the tricky hole 5 where he handed second place back to David Keene only to make that shot up on the very next hole.

Thus leaving the TD Simon Feasey to take the honours for the second year running.s 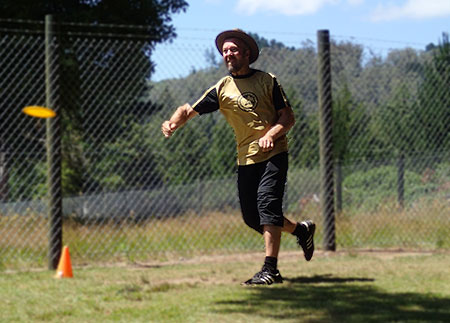 You Cannot Fence in the German - Visiting Berlinite Moe Dorken releases his trademark side flick on the lengthy 12th.

"You'll never get it down from there!" - The 9th green is one to really take in, surrounded by mighty Redwood Pines. 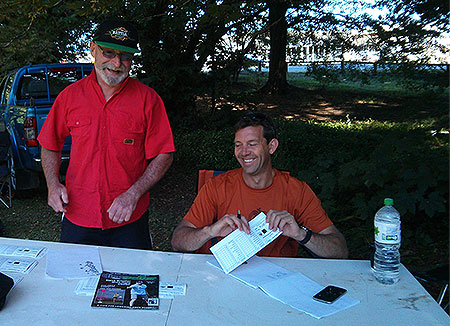 Multitasking - With little helper Pete nearby, Simon Feasey was able to set up the course, run registration and win the tournament! Who said men couldn't multitask? 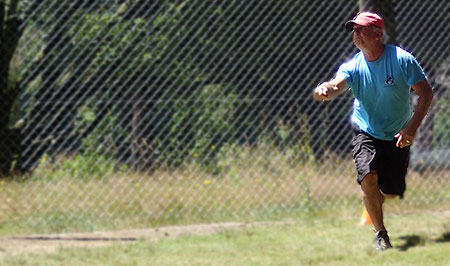 Cohen Places - Always one to encourage his fellow player, Waiheke's Paul Cohen started strong with a first round 65. 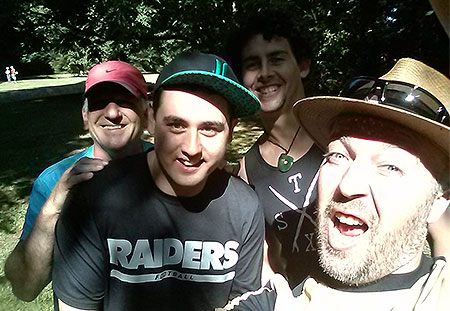 Channel Change - Shifting the 11th one channel across certainly didn't make it any easier. It seemed to be a case of making it all the way or hardly anywhere, but for Women's Champion Gemma Sullivan it was a piece of cake with her firing an amazing Hole in One for a lone Ace Kitty collection.

Makaripi - as if the glory of winning isn't enough, the wonderful trophies surely add to the motivation to try and play at one's best.