For all that ascended to National Park in the central North Island they were in for a real treat. That treat just happened to be freezing temperatures, high winds and even hail!

As always, weather that would turn most away had no bearing on the battle hardened Kiwi Disc Golf community. Every time you are to step foot onto the Smokin Mountain Course you are in for a challenge. As if the course wasn’t hard enough you then also had to contend with the conditions on top of everything which you think would have played into the hands of TD Des Cooper, however that was something only time would tell.

After being greeted with the most testing conditions on the tour this year the wind and the sideways rain made for some higher scores than everyone wanted. Not to be outdone was the added spice that saw the battle of the top two tour players going head to head for the 2013 Tour Title.

After the first round was finished and the wet cold bodies had stumbled back into Discovery Lodge it was both Simon Feasey & David Keene who had carded the best rounds of the morning with both players carding a two over 57. While at the other end of the scoring was a brutal 88 who’s proud owner shall remain nameless...thus painting a true picture of how testing the conditions and the course were.

While some of the players were able to swap the wet clothes for the dry and generate the blood flow back to their extremities, most were happy for a hot cup of coffee or tea. With Simon Feasey & David Keene having an 8 shot lead between them and the chasing pack of Jackson Sullivan , Blair Joines, Shane Sullivan & the fast improving Logan Papanui it was going to take a group effort to haul the front two in.

As the second round unfolded in possibly worse conditions than the first, Jackson Sullivan was able to break away from the Second group to put himself into outright third with a hard earned 57 while the second round saw the likes of defending Champion Brad Muir shoot a weekend best 61 along side TD Des Cooper to bring themselves right back into contention after slow starts.

Mike Proctor had fought his way back to close the gap on the Grand Masters Leader while Jenny Joynt had her nose in front of the ever improving Paula Wilson in the Womans division.

The developing battle between Simon Feasey and David Keene had swung the way of Simon as he went into the Sunday with a two shot buffer after repeating a solid 57 in the afternoon. The first order of business come Sunday was the TD’s call "weather" or not the tournament was going to be adjusted to 3 rounds due to the weather conditions. After a democratic approach there was not a single voice that wanted to only play three rounds on this amazing and testing course. Round three saw much of the same unfold as Simon Feasey for the third straight round carded a 57. This time David Keene was able to hang tough and go with him setting up a grandstand finish for the fourth and final round.

Other improvers on saw Logan Papanui cut 5 shots off his score from the previous day and also “The Human Highlighter” of Brady Keuch also continue to improve. Mike Proctor was in a tight battle for the Grand Masters title with both Shane Sullivan and Des Cooper only two shots adrift heading into the fourth round. Two shots were all that separated the two top tour players for the 2013 Disc Golf year. And after the first hole of the fourth round that was cut to one as David Keene birdied the first hole to bring the tournament back to a knifes edge.

Hole two saw Keene fall into one of the many “potholes” that national park has to offer. While not being able to apply any pressure onto his leading foot it presented a true problem for the Tour contender, only being able to stand and through most of the round forehand ( aka Mr Boyle Jr.). Taking nothing away from Simon Feasey however, as is the case when a champion is challenged they will find another gear and step up to the plate. Simon did just that carding a weekend best 55 and taking not only the Masters Division but the overall title while David Keene couldn’t find the shots or the answers and was a minor miracle that he was able to complete the tournament, as it was later found out that he in fact tore some ligaments in his ankle, though was able to hold off the Jackson Sullivan for the Open Division title.

In the dash to the finish line saw Mike “The Doctor“ Proctor prevail in the Grand Masters Division while Jenny Joynt had her hands on the Women’s title for 2013.

A special mention to Des Cooper for another fantastic tournament and one that will continue to challenge the entire New Zealand Disc Golf community for years to come. 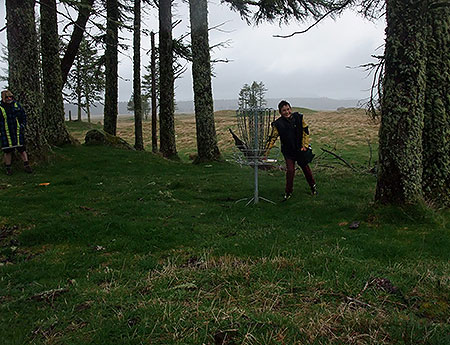 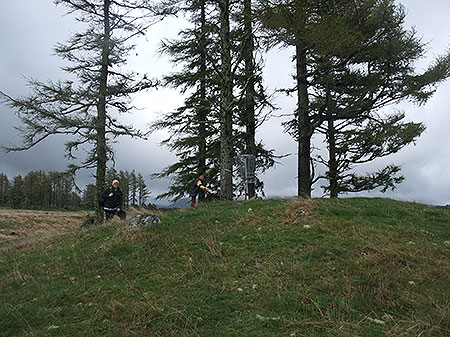 Keran putts as the ever improving Jackson Sullivan from the Levin Brotherhood club watches on. 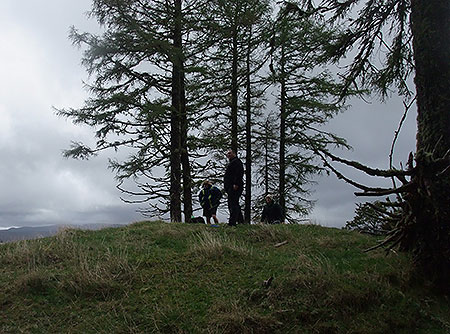 Palmerston North Disc Golfer Quan Western, Pete Boyle and Jacko on the Tee. Somewhere in the low cloud in the background are the cones of National Park 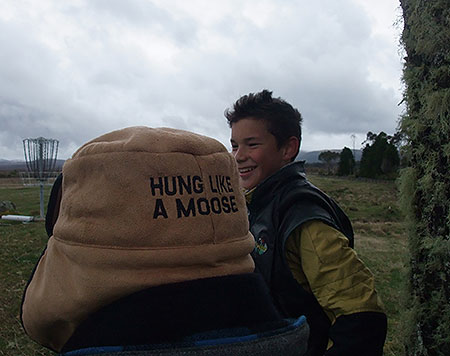 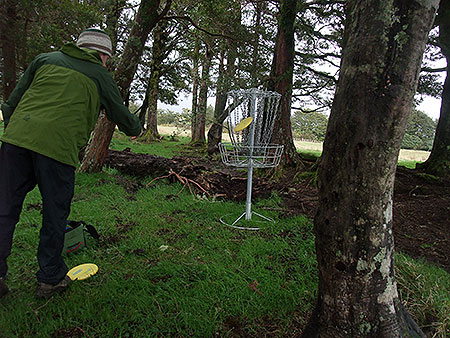 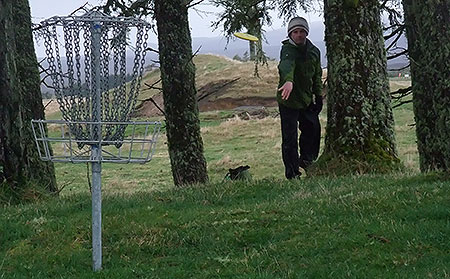 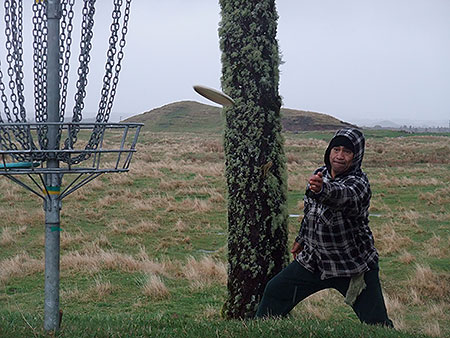 Victor slams another one into the chains in between gusts. 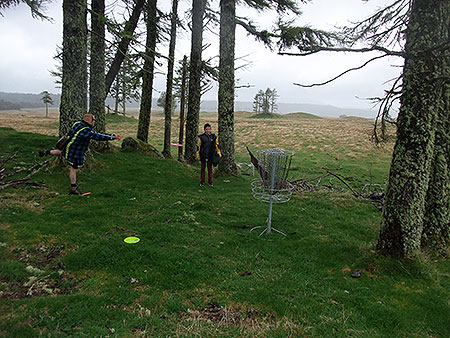 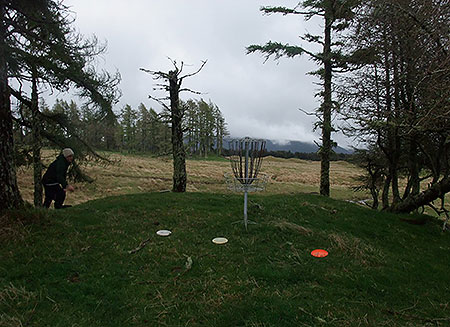 Jacko Sullivan showing the form that would see him take 3rd place overall. 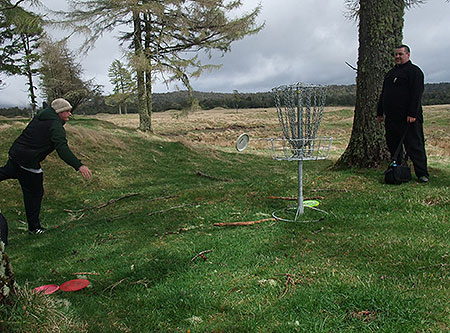 To the amusement of Quan, Jacko’s putt is turned back by a 30 kilometre per hour gust, there were plenty of those. 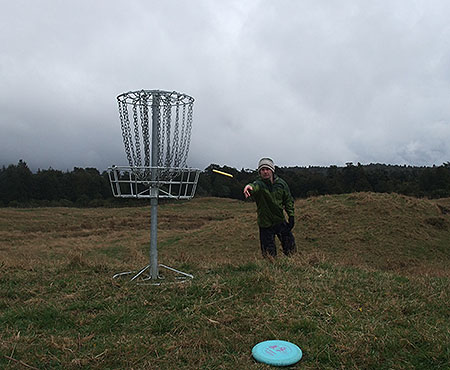 Initially from the States but now an Auckland Disc Golfer, Jacob Cochran battling on after sinking up to his chest when the bridge broke over a creek. 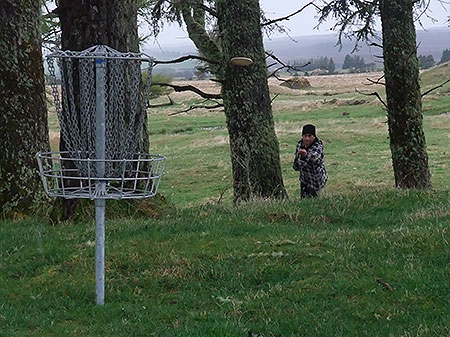 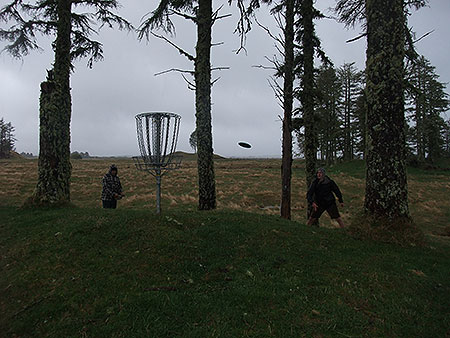 Nate Stone, from the States via Wellington with a smile that never left his face.

Father and son Pete and Quan check out Jackson’s ever increasing power driving.

Kereopa style. Victor watched closely by Jacob lines up his shot on the exposed basket on 18.

Taumarunui legend Pete Boyle, master of the side arm flick gets one away as another squall gathers on the horizon.