The NZ Disc Golf Tour hit the ground running for 2013 with 2 great events in January alone. After Makaripi - The Rotorua Champs, golfers headed to the sunny Hauraki Gulf of Auckland for the Waiheke Island Disc Golf Championship - the battle for the Two Taniwha trophy.

This story by our budding junior report Eddy Tour.

The 2013 tour carries on to one if not the most beautiful scenes in New Zealand Disc golf, Waiheke Island. After an amazing start to the tour with 34 competitors going head to head in Rotorua, 23 turned out to Waiheke Island on Auckland’s Hauraki Gulf.

What was even more impressive was the fact that 8 of the 23 were juniors all getting a chance to stretch their arms before the 2013 Nationals! Regardless of the fact that he had not won the overall tour in the last two years the mere presence of 9 time National champion Simon Feasey was enough to earn him the favourite tag from the team of lefties and up and comers David Keene and Brad Muir.

The sun yet again turned up and just to make sure it was as testing as ever on “The Island “ so did the wind. The course was in great condition thanks to locals Paul Cohen and Siep Van Vliet and the ongoing support from the Auckland Council to mow and maintain the grounds. TD Brett Hailstone was going it alone while brother Nigel Hailstone was off doing some Mexican Waving at the Australian Open Tennis tournament. However he had a fine substitute in the adopted Kiwi Disc Golfer Moe Doerkin making his way back from Germany to play in the event.

Even before a disc was thrown it was fantastic to see the number of juniors there doing warm ups and showing that the future of the sport is safe as long as there are course to continue to aid the growth of the sport.

Down to business and with the cloud cover now completely burnt away and the wind in full swing the players all set off for the first round with locals having high hopes after local course Grand Master Paul Cohen shot an amazing 7 under (20) on the front nine holes in a warm up round that very week. Not to forget the arrival of another Waiheke Englishman Leroy Windle who is rapidly improving.

As the stories started to roll in and the players were reminded that they are human there was no one that really took to the course with Simon Feasey starting on an even par 54 while not far behind was Siep Van Vliet leading the local charge two back on 56. Amongst the chasing pack was the fan favourite Moe Doerkin, back from Germany shooting a 57 along with Brad Muir making up the top group on a 58. Showing some strong form were locals Malcolm McMarteen and Mike Gibson, with Malcolm shooting a personal best to put him into the second group for the afternoon round.

The conditions were beautiful however as some who have played The Island know it can be a dangerous combination come the afternoon with concentration becoming harder and while most players will hit the fatigue wall one man dug into his work. Simon Feasey was only one of two players to improve on the morning's round (and the only non-Mexican). While the majority went the other way Simon increased his lead to a solid 9 shots shooting a 1 over the two rounds to go in over night at 107 ahead of an improving David Keene and a solid showing from Brad Muir both on 116 with local Siep Van Vliet propping up the top group for the Sunday morning on a total of 118.

The bookies had called it and unless the chasing pack were to pull a miracle out of the bag much like the Black Caps recent series win in South Africa. The title looked a solid bet to be staying at the residence of Simon Feasey’s Bella Rakha for another year at the very least as he has single headedly had a dominance over this tournament over the last 7 years. However when you attend the Waiheke tournament most golfers know that the golf is only one side to this amazing tournament. The festivities that followed on from the Disc Golf on Onetangi Beach are enough to make anyone move there permanently. Great food, great hospitality, fun frisbee throwing and great banter made for an amazing evening and one that will be hard to beat for a lot of players in attendance.

So to the Sunday it goes and with some tired bodies emerging the question remained if a 9 shot deficit could be over turned. As not since the Great Ginger crumble of Martin de Haas at “the Extreme” has a lead this big been hauled in. The short answer, not when you’re playing The Fease! The morning round saw Simon start with two birdies in the first three holes while Makaripi Champion David Keene attempted to go with Simon and was making a solid fist of it carding a front nine 23. However that was only good enough to have clawed one shot back from Simon. While still leading the Masters and in third equal at this point was Siep Van Vliet along side Brad Muir.

Little were they aware however the fantastic forearm of Moe Doerkin was hot on Siep’s tail closing the gap to one shot at this point with nine holes to play and across in the Grand Masters division overnight leader Juan Unda was being hauled in at a great rate of knots from the TD himself Brett Hailstone who had a horrible Saturday by his high standards and had hit his straps at the midpoint of the third round.

All three grandmasters (Unda, Cohen & Hailstone ) where within 3 shots of each other with nine to play. As the top group entered the back nine this started to unravel for David Keene and Brad Muir with both carding scores that they would like to forget while Siep had managed to take a hold on outright third place from Brad. Watching the way Simon played the morning round and how he took to the course was something of a master class and there were lessons learnt for all other players that got to watch while he bought home the tournament best score of 51 with David Keene moving to outright second with a 54 with siep a further 4 shots back in third.

So on to the Super Six and the buzz that was around this was still special even though the title was now safely on it’s way back to the mainland of Auckland. For first time super six Leroy Windle was a crowd favourite and showed the gallery that it was no fluke that he was there and that it’s only a matter of time before he picks up his first title. While the action surround the battle of the Masters with both Moe Doerkin and Siep Van Vliet level on scores with Brad only a shot a drift and all within striking distance of David Keene and second place and not to mention valuable tour points. As the drama unfolded there was plenty of shuffling and coming into the final hole there was no movement between Simon in first place and David in second (a whopping 15 shots) while David had managed to pick up a further 3 shots on the chasing bunch with Moe holding a slender lead on the last hole of the Super Six to take out the Waiheke Masters Title for 2013 and Siep succumbing to fourth while Leroy holding his nerve managed to sneak ahead of Brad into fifth place.

The course was tough and to see the way Simon played in the conditions showed just why he has dominated this tournament and why he has so many national titles under his belt. It was a lesson to the chasing bunch of just what is required to beat the man at this tournament. The tournament itself was fantastic as always and as for the weather … simply breath taking with even better hospitality (though if you could do away with the wind it would be much appreciated for next year :o)

So onto the Nationals we go!

Please refer to our Auckland courses page for details of venue and transport, accommodation, facilities etc.

Highly recommend Whakanewha Regional Park campsite, it's a beaut. and only 5 mins drive from course, will provide transport by arrangement no problems. 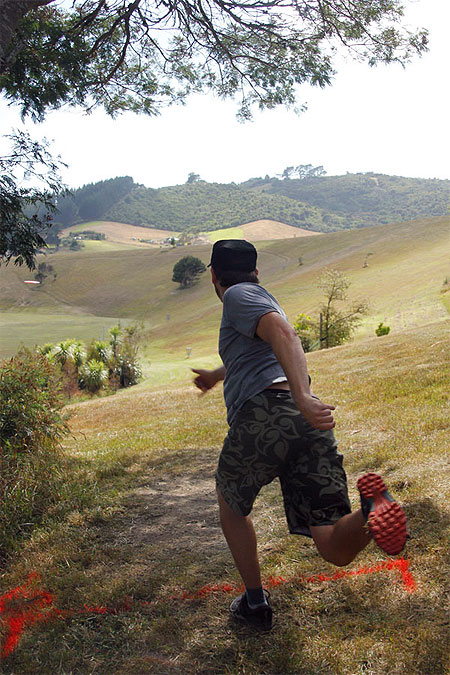 Muirful - Leftie power up at Hole 6 as leftie Aucklander Brad Muir sends his disc into the breeze hoping to land close to the pin. 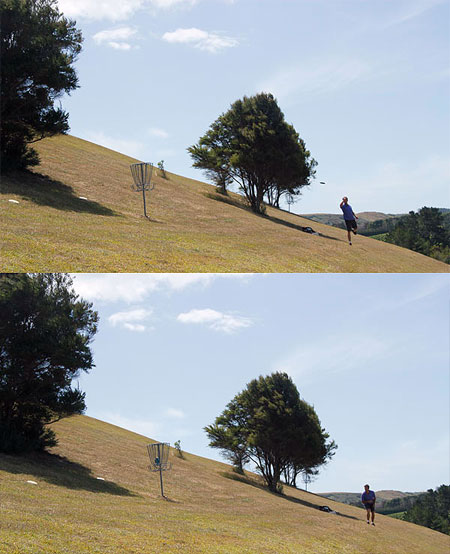 Feasey makes it look Easy - Yep, here he is potting a looong put on the 11th on his way to the title. We're talking Simon Feasey (Oratia) the Champ. 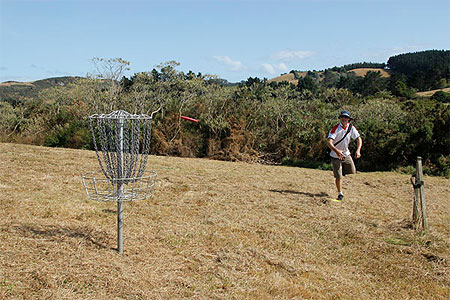 The Boyle Bag Technique - 'What wind?' seems to be the question asked as Juan Unda (Mexico City) ensures he clocks a birdie 2 on the 9th. 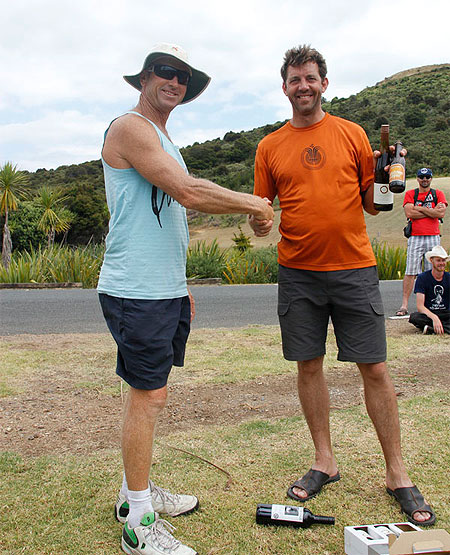 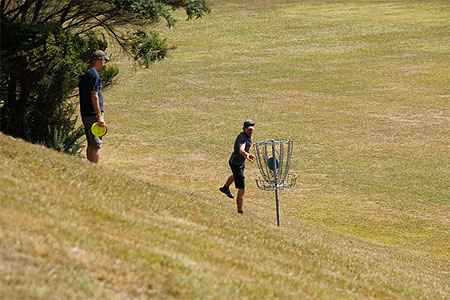 Slopey Play - Siep van Vliet (Waiheke Island) pops one into the 5th basket watched by Juan Unda (Tiujauna) watches on holding his extensive disc quiver (a putter and one Eagle). 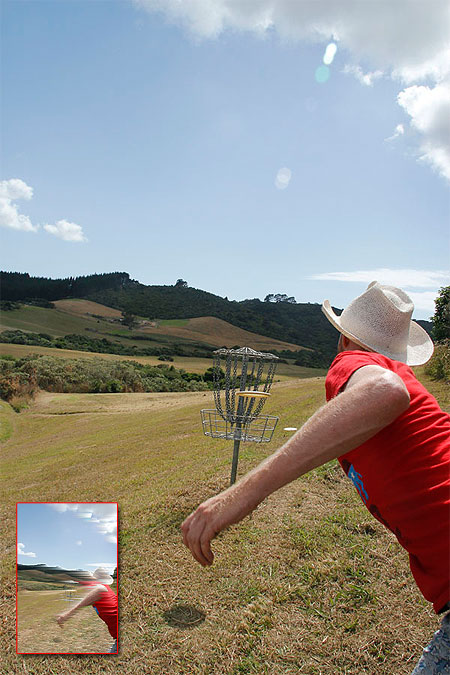 Looks Easy - These pictures cannot show the wind, so it is hard to explain how tense this 'easy' looking putt was for Malcolm McMarteen (Waiheke Island) on the very tough 13th 'penninsula' hole. 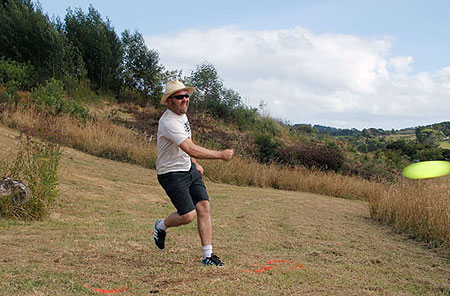 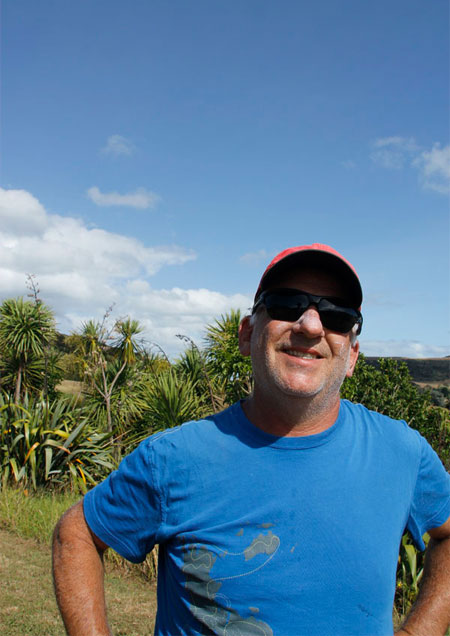 Local Lad - Despite not playing as well as he knew he could, course director Paul Cohen (Waiheke Island) still had a smile for the camera. 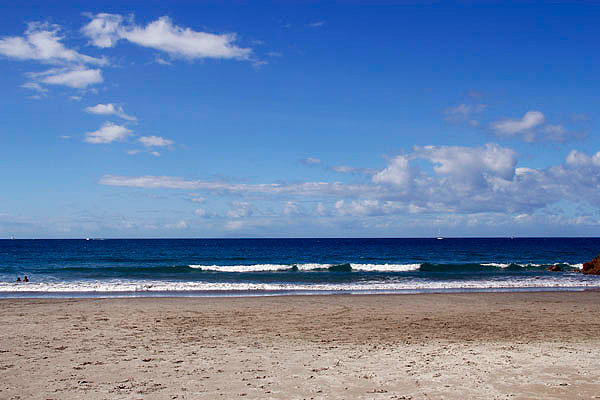 Hole 19 - At the end of Saturday's play, everyone headed to the 19th to throw more frisbees and enjoy the local hospitality. Thanks Brett & co.!