Nothing's greater than a round at the Crater!

For disc golfers in Auckland, New Zealand, mid winter July has come to represent the tradition of the Freaky Styley Crater Cup Disc Golf Tournament and in modern times this often extreme competition has become one of the fun events of the annual New Zealand Disc Golf Tour.

The Crater Cup is somewhat unique in that tradition dictates that the player who wins earns the role of Tournament Director and Course Designer for the next year. 2012 was a little different in that defending 2011 champion Simon Feasey was not going to be in town for the action and so it was local players Woody and Mike Proctor who stepped up and helped organise a great weekend.

With the help of Hall of Famer Bob Gentil who always ends up booking the park, Woody and the Doc were presented a challenge when the council informed them that a 'stake holder' had decided that we could not take this great passtime to certain areas of the park that have always defined this competition for decades - areas that players have treated with the utmost of respect . So the course ended up being far from the extereme affair it has traditionally been recognised for due to this disappointing restriction but also due to the unseasonably wonderful weather - both days saw bright sunshine and very little wind, great ingrediants for good disc golf.

And good disc golf we got, none as good as favourite and 2010 Champion Damian 'Damo' Peters who looked to seal the deal early with a fabulous six shot lead over fellow local Brad Muir.

By the end of Saturday that lead was 10 and it was a confident Tournie Leader who attended the fun and games of the evening at Freaky Styley HQ for a great dinner (thanks Marty and American Nick) before some necessary DG meetings, some sharp foozball (down trou Jacob!) and a celebration of Bob Gentil's induction to the Disc Golf Hall of Fame.

Come Sunday and with the great weather continuing, Damo easily held on to his lead on the field, treating spectators and players alike to some fine golf in the Super Six final which was an all-local affair of Muir, long time Crater Dude Chris Kingsnorth, Bob Gentil, Brett Hailstone and Mike Proctor.

Enjoy the pics below with comments that will tell you more about the fun and happenings of the comp.

Well done to Woody and Mike on the course and thanks from all players to Freaky Styley and Hayden from Woodhill Disc Golf for most of the baskets used. Based on the great response of other park users over tthe weekend, it is a real shame that the managers of this park cannot see the value of having a permanent disc golf course here - free to play, cheap to set up, so good for fitness, coordination skills and just getting people outdoors. Shame on you Auckland Council! (the views and expressions made in this commentary are those of the author only and are not blah blah PC blah).

Golfin' Gal - She's become the Lady of the Layup, the Dame of Drives, if there's a Tour Event on, you can count on Tokoroa Disc Golf expert Jenny Joynt being there.

Good Style - We don't see Lisa Te-Awhitu (Queenstown) on the circuit much, but she was playing like a seasoned pro, here with her approach shot on the 9th. 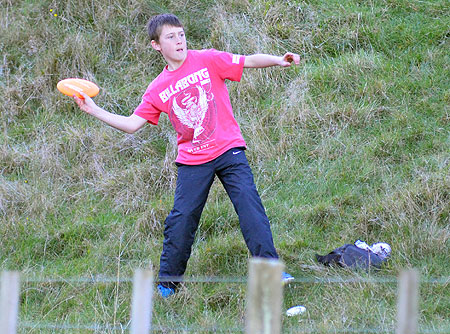 Young Gun - Waihekian Jacob Hailstone was all alone this year in the Junior division, but that didn;t stop him from showing us how it's done with a spctacular sub seventy 67 in the first round. 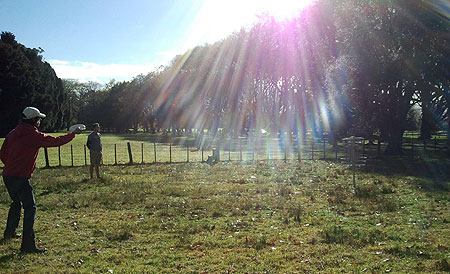 Angel Rays - From the sunny isle of Waiheke, Leroy Windle squints into the winter sun in an attempt at a bridie three on the lengthy par 4 12th. 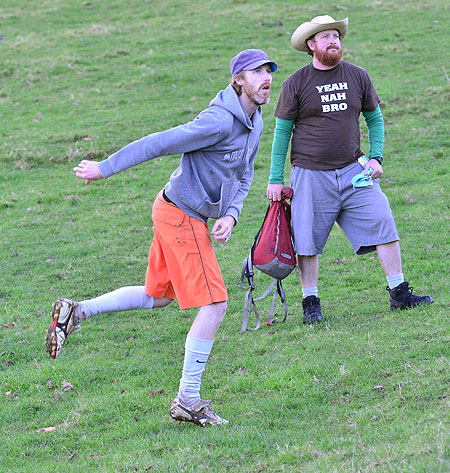 Looks good, on no, yes!, come on, aergh!, alright!, phew- This demonstrates what a golfer goes through on those long putts. Fitting that Tournament Director and Course Designer Woody should it count from afar on hole one.

Rock Star - Auckland golfer George was hoping to score the Ace Kitty for the second year running (after a stunning hammer Ace in the 2011 tournament) but it wasn't to be. Here he is focused more on avoiding the OB from the Hole 6 tee.

Spot On - Local golfers Woody and The Doctor put together a great course considering the rather silly restrictions put upon them by the Auckland Council. We love this park, why would we disrespect it!!

A Checkered Round - One of the player we oftern see at the Auckland rounds of the NZ Disc Golf Tour, mighty Conrad watches his drive on the 6th. 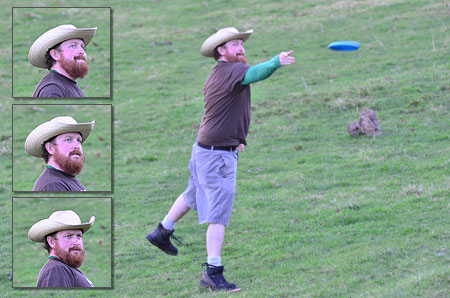 The Texan Twist with Tuck and Roll - With more emotion than Smoke on the final corner of 'Dega, Texan Nic Harrell IV (B?) lives and breathes his approach shot on the seventh. Pura Vida.

Pleasant Pheasant - Some spectators were able to view the action from unique perspectives. 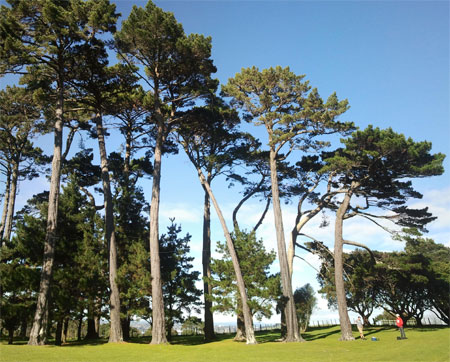 Tall Timber - The first three holes could define a round with birdie opportunities mixed with the first starting under some tall pines and treating many passers-by with their first glimpst of this highly addictive sport. 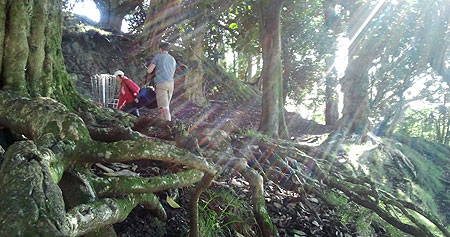 Rooted - The seventeenth invited much excitement and the opportunity for players to show their power and accuracy with an uphill line to a narrow entry into the green. Whilst many went wayward or short, there were plenty of hold-your-breath runs at the chains.

Orange-a-boom - Auckland's Nick McKay makes it hard for himself with his drive bouncing off the fairway bunker on hole 15, forcing a forehand approach that will (hopefully) fade from left to right into the green.

The Fililpe Flip - With dreads swinging Queenstown based Chilean Filipe Stein flings his disc towards the target on the sixth.

OB-Wan-Ka-Georgie - Toying yet again with one of the many OB fences, it was like George (Auckland) was using The Force to steer his discs away from disaster.

Elevated Dogleg - Hole Ten was one hole that approximated the traditional Crater Course in that players shot from an elevated tee with great vistas of Auckland. Here Lisa Te-Awhitu (Queenstown) drives the dogleg that would curve left to the basket positioned just out of view by the Freaky Styley Clubrooms. 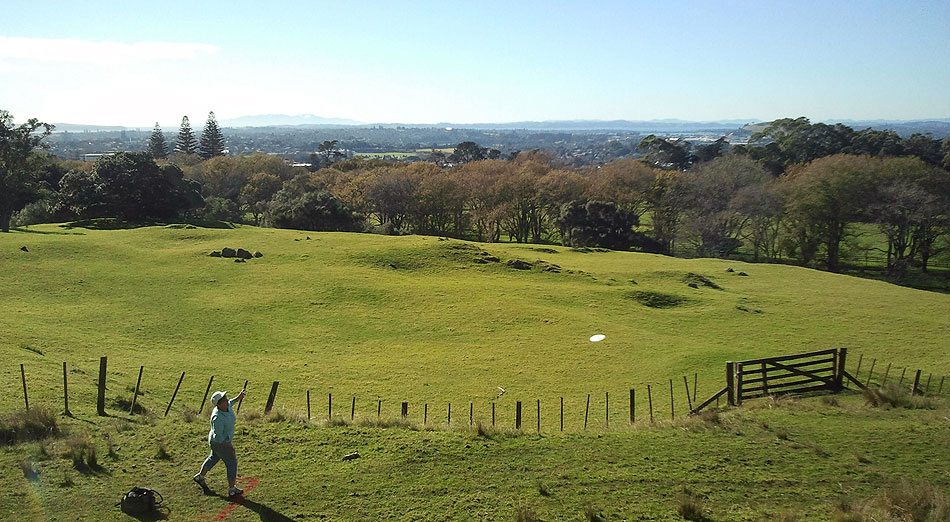 Room with a View - Hole 18 and with a great view of Great Barrier Island and the Coromandel Penisula Jenny Joynt (Tokoroa) drives from the Woman's Tee. The 18th was a classic: almost impossible to birdie (although Marty de Haas managed to!) but with the scary pin position, a candidate for the odd double bogie. 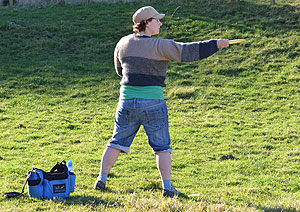 Lining Up - Dunedin's Hannah Joynt is all technique as she lines up an approach on the mighty tough 9th. We can only imagine how much tougher it would have been with a strong westerly blowing! 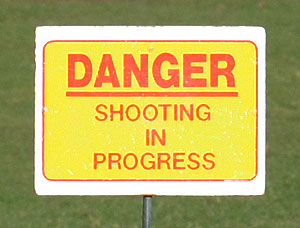 Is Jim Playing?- Actually, this was for the Archery which was located close to the hole 4 tee. Crater original Jim don't play tournies no more. 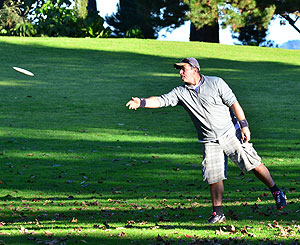 Great Putt - The 9th hole was long and tricky, but Lisa Te-Awhitu (Queenstown) makes it look easy with a superb putt after a great approach shot. 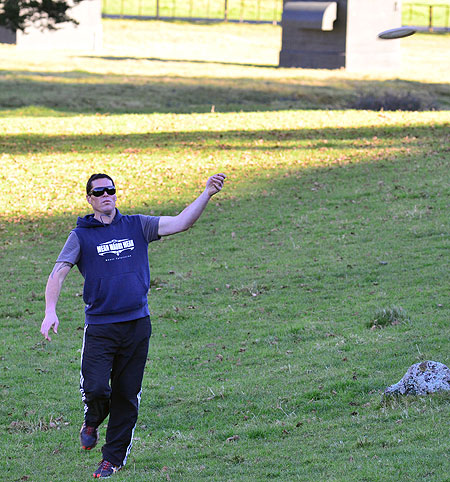 Hemi V8 - The other half of the Te-Awhitu equation is Hemi here playing up to the green on the 5th on the way to a fine 56 on the second round. 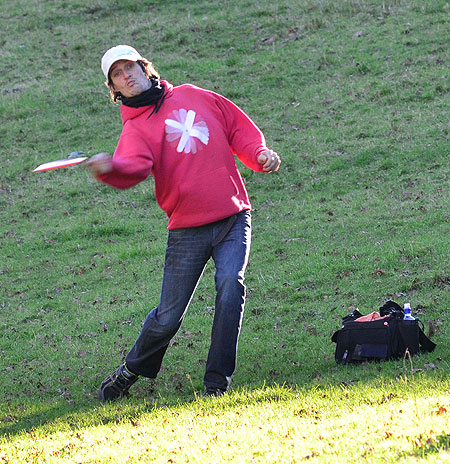 Propeller Man - Leroy Windle (Waiheke Island) is one of the many local players who has mastered the rotational torque of the forehand technique. 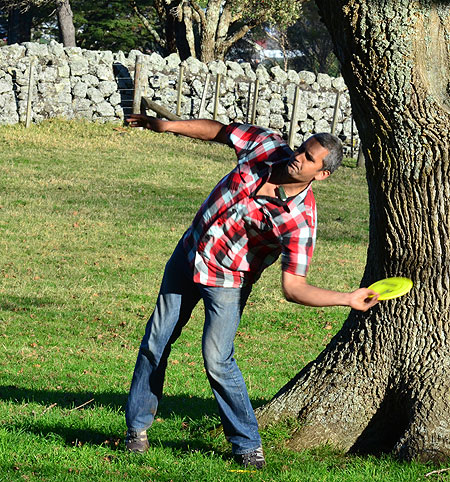 Curvaceous - Local player Conrad with his big arm in forehand mode as he is all concentration from a tricky lie on the sixth fairway . 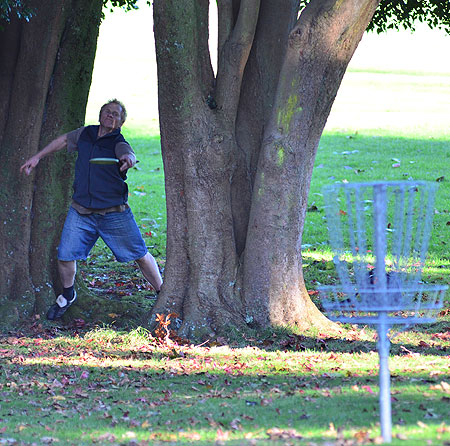 Leaping Lefties Batman! - With the knowledge he wouldn't be making the third round, local player Marty de Haas leaps from between trees to make a run at the basket on hole 1. De Haas visits this park almost every day, either to run, ride, throw or partake in his favourite passtime, interpretive leaf pressing. 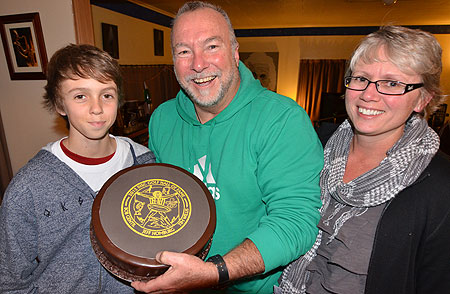 Its a Gentil Affair - Disc golfing legends Toby, Bob and Sheree Gentil pose with the cake celebrating Bob's induction to the Disc Golf Hall of Fame. 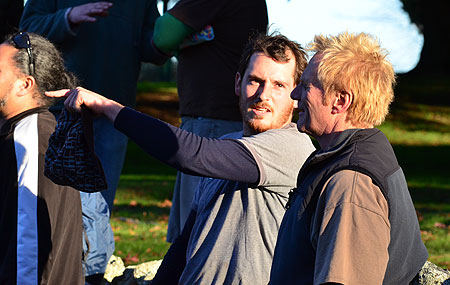 "And a rightie picked on me over there" - As we know, Lefties congregate together for support. Here Brad Muir (Maungakeikei) shares a story with fellow southpaw Marty de Haas (Maungakeikei). 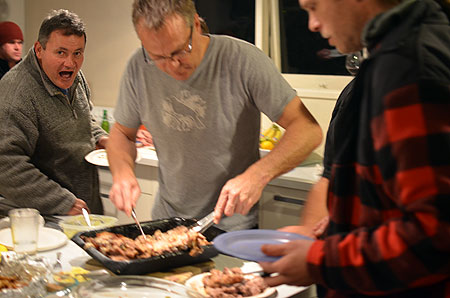 "Just shovel it in here" - Hungry golfer Mike Proctor (Auckland) lines up for some of Marty's juicy slow roast pork at the tournie dinner. On carving duty is past disc golfer Virgil Reality who has turned his back on the sport, but doing well in competitive embroidery - a sport where you certainly don't want to turn your back! 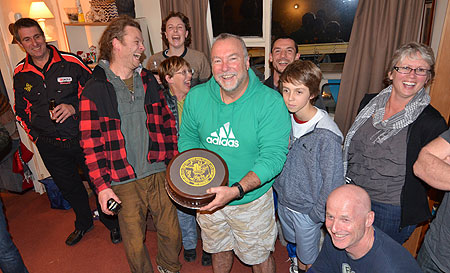 Good Times - Paul who? Much mirth as Bob proudly shows off the cake presented to him by his fellow golfers to celebrate his induction to the Disc Golf Hall of Fame. 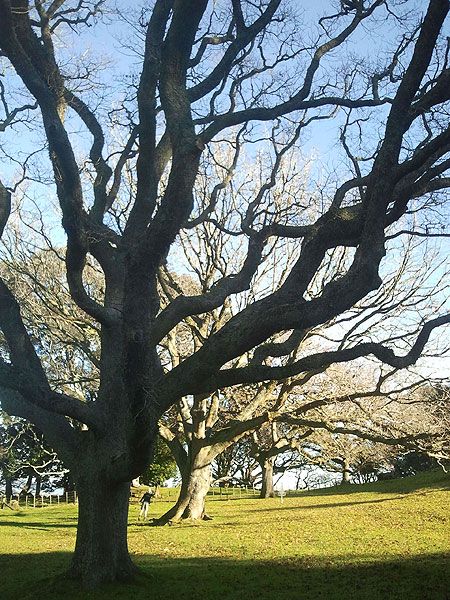 Gnarly Dude - With winter baring the branches of big trees of the 5th hole, Brett Hailstone (Waiheke Island) attempts a long putt for birdie having expertly fired his drive long and low. 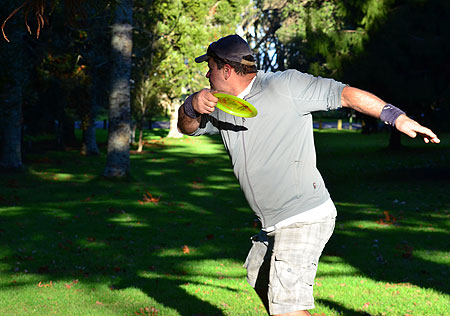 Like Surgery - Every time Mike 'The Doctor' Proctor (Auckland) steps up to the tee, you know what you are going to see. With one of the most consistent throwing techniques on the tour - perhaps thanks to a career at the top level in Auckland Rugby Union - Proctor is never far from the leader board. 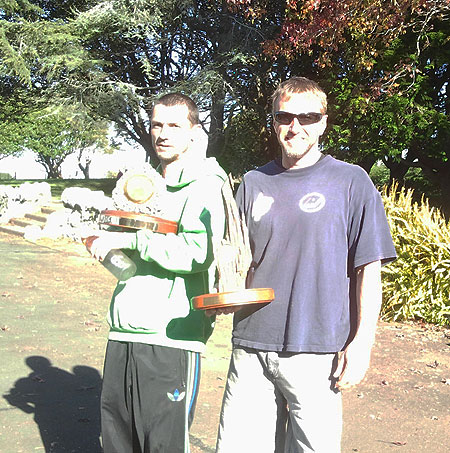 One for the Cabinet - Winners of the Overall and Open Damian Peters (Auckland, left) and Masters Chris Kingsnorth (Auckland, right). The gals had already bailed before prize giving.

These are unofficial results, tune back in later for final results! * = leftie