After a year of hibernation the Tauranga Extreme was back with all of its usual challenges and a few new surprises for the competitors on the tour.  With the sport growing at such a healthy rate it saw 32 players take on every level the extreme had to serve up over the weekend. A big thank you to first time TD Myles Darrell for putting his hand up to run the event and also the help he received from many in restoring this event to its deserved place on the tour, Brendon Love, Dean Marshall & Ming Menzies for helping with the course, Bob Gentil for the Scorecards and Daryl “Daz” Swatella for the catering and anybody else who had a hand in making this event happen.

The players embarked on some amazing and challenging golf in the opening round. While in amongst trying to get your disc to land flat, not get a roller and still get a par there was plenty of stories to be had after the first round. It was a pleasant surprise to see Barry “Baz” Keene come out of retirement after a long layoff and still managing to string together some excellent golf to card a first round of 65 after 4 years in the wilderness.  Ascending himself to the top of the Leader board after the first round though was a man who played the smartest golf in the morning, Bob Gentil with a 56 while the Chasing pack was lead by Course Designer Dean Marshall and National Champion Simon Feasey both on par rounds of 57.

While a log jam of players on 58 meant heading into the second round, the pressure was on to improve on the first round efforts and fight your way up the leader board. While some classic battles between the course and players were unfolding, Marty de Hass had resumed his ongoing golf saga with the ever-consistent Blair Joines.  Further back the battle between Grand Masters Des Cooper, Pete Boyle & Mike proctor was spiced up even further with the return of Waiheke’ s Brett Hailstone to the tour. However all eyes were on the man leading the GM division and the tournament Bob Gentil.  The tour embraced its first rain of the year as a stunning second round was unfolding in the top group with local Dean Marshall taking the course head on and coming out with a staggering round of 50 in wet and cold conditions to give himself a 7 shot lead over his nearest rival. It was a flawless effort from the local to promote himself into pole position and open up daylight between him and the chasing pack. That included a big push from Blair Joines who carded a hard fought 56 in the afternoon with current NZDG Tour leader David Keene just one shot behind.  Ming had etched half of her name into the woman’s trophy with some solid golf over the two rounds. While over in the Grand Masters Division Marty de Hass managed to make inroads into the GM’s lead going in overnight all square with the chasing pack only a few shots behind.

With all the new faces we are seeing on the tour the Vegas Disc Golf crew weren’t to be forgotten about with local pride on the line (not to mention bragging rights) with the overnight honour’s going to Logan Papuni only a few strokes ahead of the rapidly improving Rotorua DJ Andy George.

As if the bodies weren’t exhausted enough from two rounds of the most challenging course in the country there was another two rounds left to play.  On returning for the Sunday morning players meeting the Tauranga Extreme had started to claim it’s victims of the DNF variety with 4 players not having the bravery to take it on for a second day. The fight for vital tour points was still out there to be had however. A picture perfect landscape greeted the players while off into another round they went. Another solid start from overnight leader Dean Marshall meant the chasing pack was held off for another round at least, shooting a 56. Simon Feasey shooting the best round of the morning with a 54 with David Keene moving into second place with a 55. At the other end of the scoring the stories started to roll in with the numbers 6,7 & 8 and even a 9 appearing all too often on some scorecards.

A smile that couldn’t be topped though was that of Andy George and his first Tournament ACE on the tricky hole 5. Andy managed to hit the chains and hit the big time taking home the ace kitty worth around $200 (bet that was broadcasted on his More FM breakfast show Monday morning). The Extreme wasn’t done claiming its’ victims however. Living up to its title it saw three further top contenders drop out after the third round allowing players to climb the leader board and make for an exciting fourth and final round. The way the top group started the final round was borderline comical with Blair & David both having horror shows on the first hole. Tourney leader Dean Marshall tried to replicate the famous Ginger crumble of years gone by (Just ask Marty what happened on this very course a few years earlier) by carding a 7 on hole 7 and going through the front 9 holes 6 over the card. David Keene was still trying to pick up as many shots as he could to close the gap and capitalise on Dean’s poor start. Marshall law resumed though, and he settled back into the type of golf that we have come to expect from Dean over the years to take out his first tour event of the year, holding off David Keene by three shots who ended up Winning the Open Division.  A gutsy fourth round saw Marty de Hass draw level with Blair for a share of the spoils in third with Marty taking out Grand Masters division. Making sure the locals covered all bases was Ming Menzies collecting the Woman’s silverware. The fast growing figure of Toby Gentil (15) wrapped up the Junior Title for another year thus bringing to a close another amazing tournament with all the right aspects and some happy but tired faces knowing they were in a true test of their Disc golfing Ability 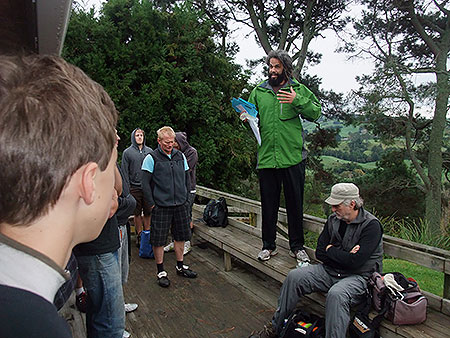 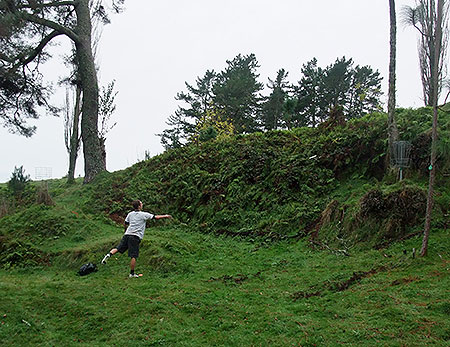 Logans Run - Rotorua ‘s Logan Papuni was finding the course a little tougher than Taumarunui but improved with each outing, making a good run at the mini competition that the RotoVegas crowd always have at tournaments. 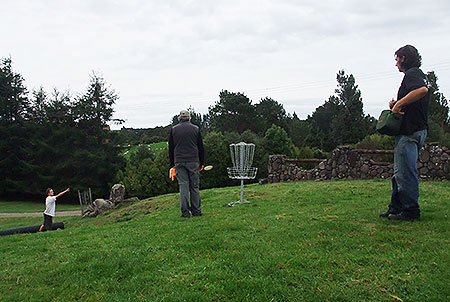 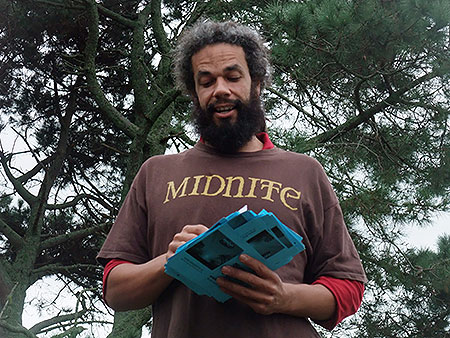 Going the extra Myles - First time TD extraordinaire Myles Darral sends the fours back out to the course on the Saturday afternoon. 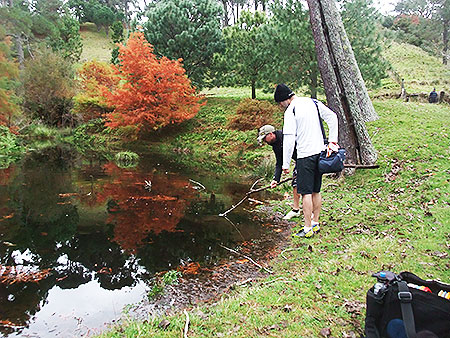 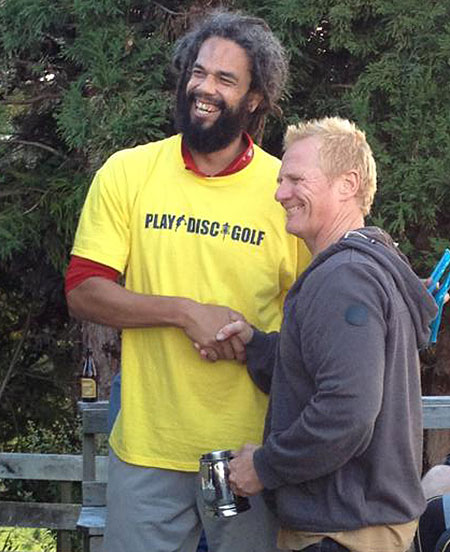 A Mug for a Mug - With a room to move, Marty de Haas picks up the silverware for the Grand Masters Division from TD Myles Darral. 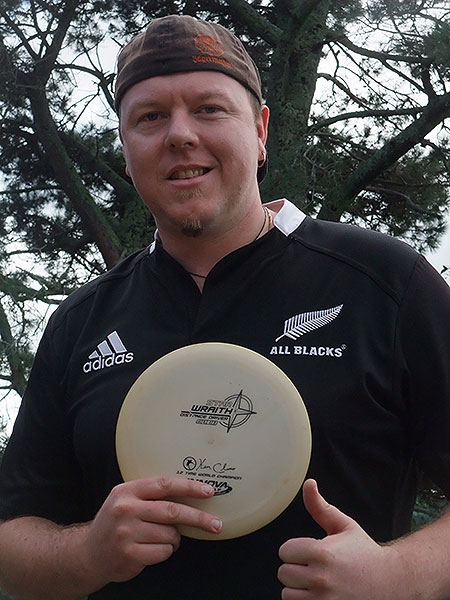 DJ Ace - Rotorua Disc Golfer Andy George loving the Innova Star Wraith as it picked him up $200 for the only ACE over the weekend. Good skills Andy! 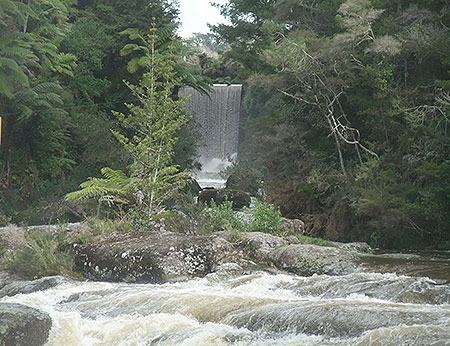 Water Scene - The stunning McLaren Falls. When the siren goes and the flood gates open it’s really quite spectacular 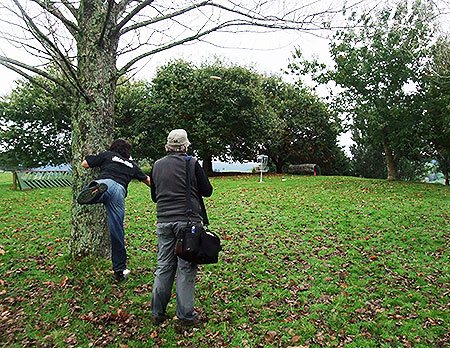 Leafing it too late? - In a true Autumn scene (that's Fall for you Americans) Wellington builder Steve Fargher sends a recovery lob putt towards the basket as local John Lee checks out his style. 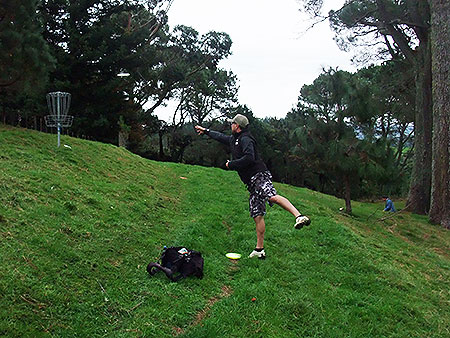 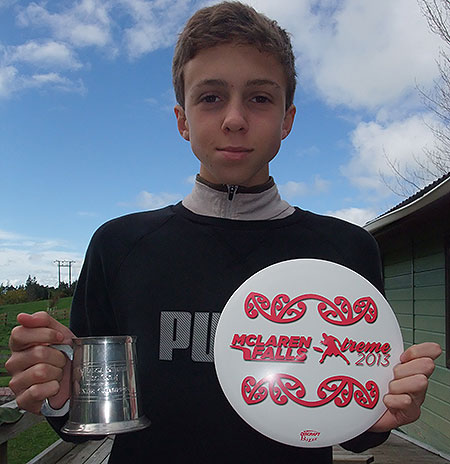 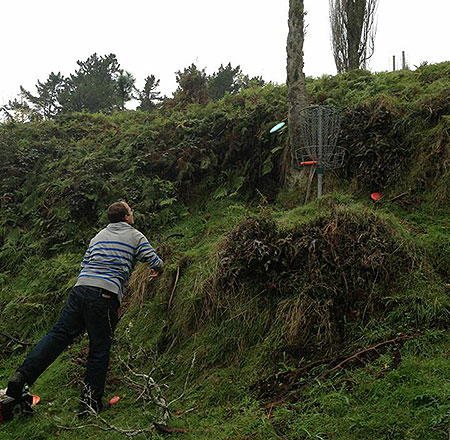 Chef's Choice - Visiting US Golfer Nate Stone has a short uphill putt on the tricky hole 5.

Sulpher Styling - Lunchtime rounds in the Rotorua Redwoods are starting to pay off for Vegas golfer Logan Papuni. We missed your caddy though!

No Run Up - Auckland Disc Golfer David Keene just centimetres off the OB water on hole #4.

Clenched Buttocks - David Keene hoping a 100+ metre roll is not on the cards as he putts up to hole #1 watched closely by eventual winner Dean Marshall.

A Miss is as Good as a Myles - Sharing the course with the local pony club saw some interesting, not to mention testing basket placements.

Solid Putt - It was a great battle for third between Taumarunui's Blair Joines and One Tree Hill Disc Golfer Marty de Haas showing the style that saw him pick up the Grandmasters silverware.